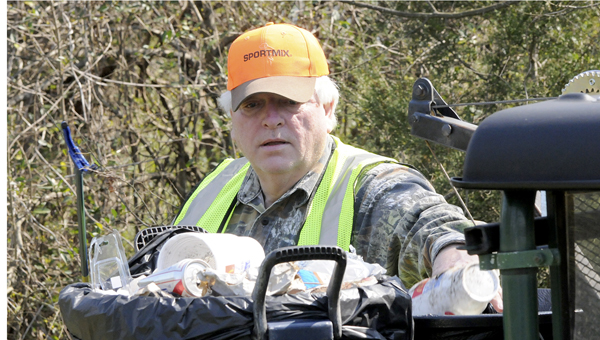 Kenneth Martin, city council member for Place 5, said the city is trying to make the clean-up day a yearly event to cut down on litter and trash on the highways.

“There’s been a lot of people willing to help and we’re thankful for them,” Martin said while handing out trash bags to volunteers.

Martin said as of 11 a.m. Saturday he had seen more than 20 residents — old and young — come out to volunteer. Highways 22 and 81 were the main roads where residents picked up trash.

Amy Harris, Valley Grande resident, brought her two children McKenzie, 11 and Tucker, 6, to help with the cause.

“I just wanted to help out in the community,” Harris said. “Some of the roads are just trashy and needed to be picked up.”

Harris said she volunteered last year in the city’s clean-up day and thought it was a great success, which is why she brought her children this year.

“I think it’s great and we should definitely do it every year,” she said.

While picking up old McDonald’s cups and various other litter along Highway 22, Mayor Wayne Labbe said he was both thankful for all the volunteers and the pleasant weather.

“We’re having a lot of fun out here,” Labbe said. “We’ve had a lot of waves from cars driving by.”

“We figured it’s the busiest highway and if anyone was going to get run over, we were expendable,” Labbe said with a joking laugh.

On a serious note, both Downs and Labbe agreed that litter is a problem in not only their city, but also the county. Keeping Dallas County beautiful, Downs said, is everyone’s responsibility.

The Blaster chapter of the National Wild Turkey Federation gave away free fishing poles to all the children in attendance... read more