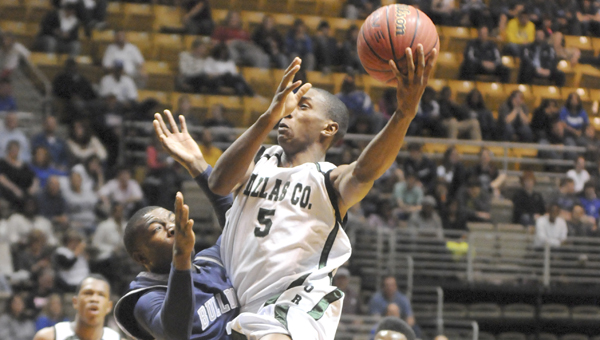 MONTGOMERY — After leading by double digits for most of the third quarter, the Dallas County Hornets faltered down the stretch and fell 67-65 on a buzzer-beating shot to the Dora Bulldogs on Wednesday, ending their season in the Class 4A Central Regional at Alabama State University’s Dunn-Oliver Acadome.

The Bulldogs (20-7) brought it up the floor, as Dora’s Caleb May drove into the lane and banked in an open shot to capture the comeback win.

Willie Moore, head boys basketball coach of Dallas County, said the Hornets had their opportunities, and while they were 23 for 30 from the free throw line on the night, they missed some key shots down the stretch.

“It was very disappointing to get this far and not play well. We didn’t do anything right tonight. We had our chances at the end and we just didn’t capitalize on our opportunities,” Moore said. “Early in the game, we were up ten and we were in the bonus, and uncharacteristically we didn’t make our free throws tonight, and we didn’t defend real well tonight.”

The Hornets had led by as much as 13 points in the third, after they outscored Dora 16-8 during a four-minute stretch where Chadrick Martin scored 8 points for Dallas County, including a pair of crowd-pleasing dunks, as they were up 48-35 with 3:53 left in the quarter.

Dallas County’s 6’8 forward William Lee also scored 6 points during that stretch, but the Hornets could not put the Bulldogs away, as Devonta Gosha scored a basket and May hit a mid-range shot and a 3-pointer at the buzzer to close the third for Dora and cut the Hornets’ lead to 51-44 going into the fourth.

Dallas County pushed its lead to 55-46 to open the third thanks to a fast-break layup by Harris and a transition basket by Jerrod Moorer, but Dora’s Robert Johnson and Dionte Smith each hit a free throw, and Smith scored on a fast break to make it a 55-50 game with 5:40 left.

With Dallas County in the bonus, Lee and Keyonis Phillips each hit a pair of free throws to counter a successful trip to the line by Dora’s Keleil James and make it 59-52 with 4:45 left.

But Dora started to come back, with May hitting a 3-pointer and James scoring on an up-and-under layup to make the score 59-57 with three minutes left to play.

The Hornets went to the charity stripe again, but Phillips couldn’t convert the one-and-one, and Dora capitalized, as May buried his third shot of the game from behind the arch and gave the Bulldogs their first lead since the opening minutes of the first quarter at 60-59 with 2:06 left.

The Hornets took the lead back, as Lee hit a pair from the line to make it 61-60, but Dora took it right back when Deangelo Pendelton scored in the paint and made it 62-61 with 1:07 left.

Dora extended its lead to 64-61 with a pair of free throws by Pendelton, but Phillips scored on a layup to bring Dallas County closer at 64-63 with 24 seconds left.

Smith hit one shot on a one-and-one for Dora to make the score 65-63 before Harris tied the game up for Dallas County.

Moore said a big factor in the game was turnovers, as Dora’s full-court press contributed to 24 Hornets’ turnovers on the night, while the Bulldogs only turned the ball over eight times.

“We’ve never turned the ball over 24 times, and we turned it over 24 times tonight. They got 30 points off of our turnovers,” Moore said, “so, if you only turn it over 12 times, you win big, and we didn’t do it tonight. We didn’t align right on our press and we sort of got underneath the basket, so when we turned it over, they had a 2-foot shot to score. On yesterday [Tuesday] we talked about spacing the floor, and we didn’t do a very good job of spacing the floor tonight.”

Dallas County outshot the Bulldogs on the night, shooting 51 percent from the field to Dora’s 39 percent.

The Bulldogs only went 3 for 15 from 3-point range, but all three makes came in the second half, and all were made by May.

Lee led Dallas County, as he had a triple-double, with 16 points, 12 rebounds and 12 blocked shots.

Martin had a double-double with 18 points and 10 boards, while Harris had 12 points and seven rebounds, and Moorer added 11 points and six rebounds for the Hornets.

May led Dora with 17 points, while Smith had 14 points, and James had 13 points for the Bulldogs.

Hornets set to return to Montgomery for Central Regional