Wallace wins two of four against Holmes on Friday, Saturday 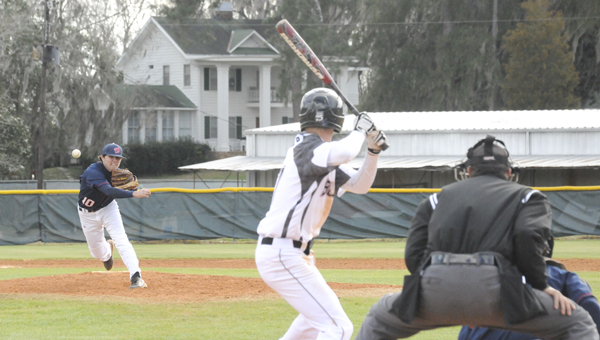 The Patriots fell 11-7 in game one of Saturday’s doubleheader, but rebounded to win game two 9-7 over the Bulldogs.

Frank Elliott, head baseball coach of Wallace Community College-Selma (3-3), said the Patriots fought hard for the win in game two, as they came back twice after trailing to get the victory.

“This is a hard-fighting crew right here. We see that already. It’s in the makings of one of our better teams,” Elliott said. “They fight, fight, fight. We’re able to bring people off the bench when we need to. When we execute, we’re tough, but it’s whenever we don’t execute offensively where we’re not very strong. We executed well on the bunts and kept these people moving the whole time, and it allowed us to get back into the game and win.”

The Patriots trailed the Bulldogs 4-0 in game two, until they started putting runs on the board in the bottom of the fifth.

After Wallace’s Michael Schofield bunted and made it safely to first to advance runners to second and third, the Bulldogs threw the ball away at third trying to make a play, allowing Joel Jones and Joab Watkins to score and make it a 4-2 game with no outs in the inning.

The Patriots weren’t done in the inning, as Brent McFarland hit a two-run home run to deep center that brought in Schofield and tied the game at 4-4 in the bottom of the fifth with no outs.

The Patriots kept scoring runs in the fifth.

After a bunt by Stuart Dawson helped load the bases once more for Wallace, Caleb Mims hit the ball to shallow right field to score Quavian Lawson from third base and gave the Patriots a 5-4 lead.

Wallace scored once more in the fifth after a walk with bases loaded brought in Joel Jones from third and gave the Patriots a 6-4 lead.

Holmes took the lead back in the bottom of the sixth after Wallace walked in a run with bases loaded and then Josh Crowder hit a shot to left field and doubled to score two runners and give the Bulldogs a 7-6 advantage.

The Patriots took the lead for good in the bottom of the sixth when Trent Jones doubled to left to score Lawson, and Trent Jones went on to score from third after the Bulldogs threw the ball away.

Parker Anderson, who started on the mound for Wallace, had three strikeouts, while Bryce Kennedy had two strikeouts in relief.

In game one on Saturday, Cedric Daniel had 3 RBIs for Wallace.

Wallace also played a doubleheader against Holmes on Friday, losing game one 4-2, but winning game two 2-1.

In game one, Lawson hit a home run to deep center for the Patriots.

Wallace’s Patrick Johnson (20) goes up for a shot against Gadsden’s Matt Margavio during Saturday’s game at Wallace. Johnson had... read more