Southside holds on to defeat Bayside, 62-58 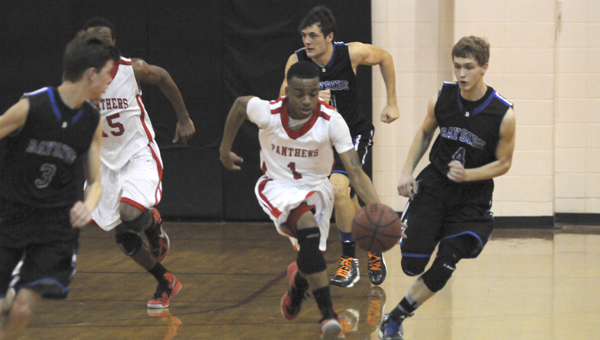 Southside’s Sammarkus Jones (1) races up court after a steal during Friday’s game against Bayside. -- Shane Gaut

After capturing the Class 3A Area 2 championship and earning home-court advantage, the Southside Panthers were able to slip by Bayside Academy 62-58 Friday night in what became a nail biting Sub-Regional game.

Cedric Brown, head boys basketball coach of Southside High School (21-9), said his team will need to learn how to finish games if they expect to make it further in the playoffs.

“We played well, but we’ve got to learn how to close the door. We had a 14-point lead with five minutes left in the game, but we let them get right back in it,” Brown said. “It’s going to take a more mature group of guys to keep up with and beat the team we’re going to face in the regional game.”

Southside was able to control the tempo for the better part of the ball game. Sammarkus Jones made two baskets from behind the arc and helped the Panthers jump out to a 9-0 lead early in the first period.

Both teams were in the bonus midway through the second quarter and Southside was able to hit enough free throws to give them a nine-point cushion going into the locker room. The Panthers led 27-18 at intermission.

Jeffery Mack caught a bounce pass, went inside and dunked the ball with 6:25 remaining in the final period, but Bayside would not give up.

The Admirals went on a 9-0 run with under two minutes to play, getting them within six points. Southside held the ball, attempting to run out the clock or get a foul called, but with six seconds remaining, Bayside got the steal and John Stuart sunk a 3-pointer, making it a three-point game.

Mack was fouled immediately on the inbound and sent to the line where he hit 1 of 2, sealing the game for Southside.

Jones led the Panthers with 20 points and Mack added 17 points.

Southside will advance to the Class 3A Regional game in Dothan at the Dothan Civic Center, and play against Barbour County or Geneva on Thursday at 4:30 p.m.

ORRVILLE — The No. 4 Keith Bears cruised to a 76-40 win over Holy Spirit on Friday in a Central... read more