City-Wide Block Party fun for all 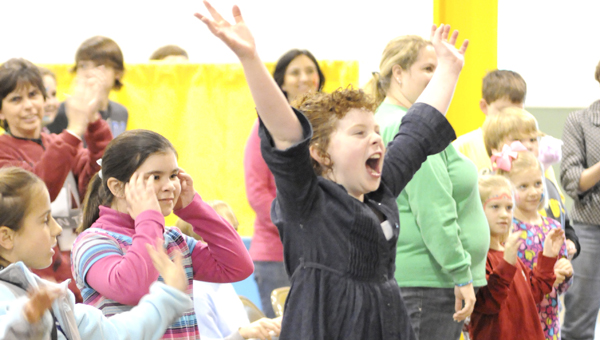 The Old National Guard Armory was filled with songs and laughter as children sang and danced with hand motions to songs at the second annual City-Wide Block Party hosted by Ekklesia.

Sounds of joy and laughter echoed from the high ceilings of the Old National Guard Armory at the Lions Club Park on Saturday.

For one weekend churches throughout the community from different denominations came together under the name of Ekklesia, which is Greek for the body of Christ, and hosted teens and youth in a discipleship weekend.

The youth as their outreach to the community hosted a City-Wide Block Party which included face painting, free cotton candy, inflatable slides and even some musical entertainment.

“I brought them here last year for this and they are doing bible activities and learning a lot besides just playing and they also get to interact with other kids,” said Kimberly Pratt who brought her four children to the Block Party. “Everyone is just really friendly and they are real nice people here.”

The Block Party hosted children from Kindergarten to sixth grade. Around the armory there were scenes of laughter as children ate cotton candy and were entertained by youth groups from around the area.

High School senior Carolyn Lee from Autauga Academy said she has grown closer to others throughout the weekend.

“It has just been a good refresher,” Lee said of the youth group weekend and what they have learned about the Bible. “I have also grown closer with my brothers and sisters in Christ.

Organizer Kristen Jones said the event seeks to not only show love to those in the community who come to the party but also bring area believers closer together regardless of denomination.

“It’s just about everybody coming together and not worrying about what their background is,” Jones said. “But instead working with the same goal of making a positive difference in the community.”

The theme for the weekend was “Heaven Roars” and the youth learned about the call of God in their lives as well as their call to serve in the community, much like their service at the Block Party.

Family members and loved ones of slain 31-year-old Bridget Woods will gather in her home Sunday and hold a vigil... read more