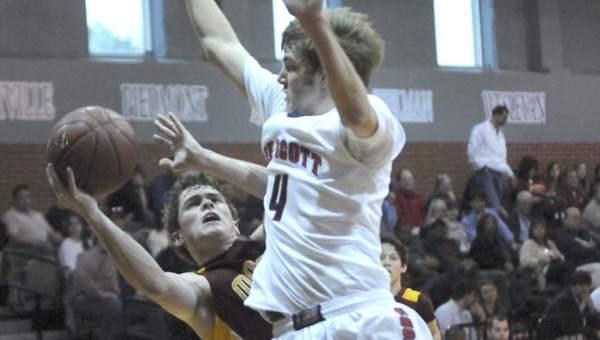 MONTGOMERY — The Morgan Academy Senators couldn’t get it going against the top-seed Lee-Scott Academy Warriors, as they fell 63-37 at Huntington College’s Catherine Dixon Roland Arena, ending their season in the AISA Elite Eight.

Lee-Scott jumped out to a 14-7 lead early in the second quarter, and then proceeded to outscore the Senators 19-0 over a four-minute stretch that included eight points from Thomas Hardin and put the score at 33-7 with 3:35 left in the first half.

Morgan stopped the run with a pair of free throws by Trey Powe, but Lee-Scott’s Chase Aldrige hit a 3-pointer to make it a 36-9 game with 2:51 left in the half.

Morgan responded by going on a run that included a free throw and a pair of baskets by Connor Henderson, and a 3-pointer by Ford Manderson that made it a 36-17 game with 1:18 left in the half, but Lee-Scott closed the half with a free throw and a bucket by Nick Buskill that gave the Warriors a 39-17 lead going into the locker room.

Morgan had 19 turnovers in the first half alone.

Henderson, Dalton Lee and Hunter Webster each scored baskets early in the third quarter for the Senators, but Lee-Scott outscored Morgan 14-10 in the third to take a 53-27 lead into the final quarter.

Hardin led Lee-Scott with 14 points, while Aldridge had 11 points and MarQuen Mitchell had 10 points.

Lee and Henderson each had 9 points and Manderson had 7 points for Morgan on the day.

It was a tough loss to close the season, but Taylor said it was a season where the Senators made great strides.

“I think getting back here was our main goal for the year. We’ve had a great year. 21-9, I know a lot of people that would trade places with us,” Taylor said. “On the year, we got back to the Elite Eight. It’s a building block. The six seniors I had, they did a great job with leadership. We’ve got a good nucleus coming back and I think we’re going to have good seasons for several more years to come.”