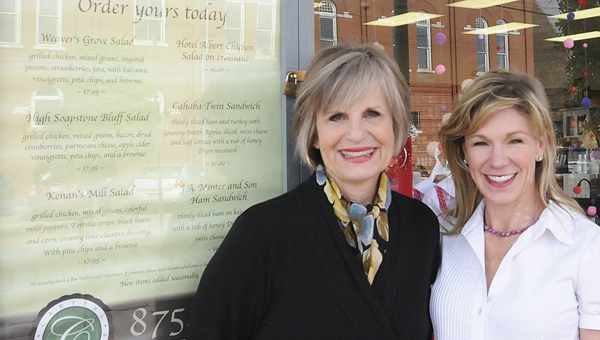 Anne Murray, left, and Nikki Gilmore, right, are part of the Elodie Lunches team, who serve special lunches outside of Carter's Drugs and Gifts once a week, inspired by Selma' history. -- Katie Wood

A fun, fresh lunch option will return to Selma’s downtown Thursday with Elodie lunches, sold exclusively at Carter’s Books & Gifts. The fresh soups, salads and sandwiches have historic ties to Selma, ties that have been revisited and given new life.

“We have a lot of barbecue in Selma and we have a lot of meat and three places, and so we just thought that it would be great to have a lunch that was tearoom type food,” Murray explained of Elodie’s beginnings. “There wasn’t really any pretty, girly, healthy food in Selma and I have just always had it in my mind to have tearoom kind of food. So I invited like five or six of my friends and we sat around my dining room table and I fixed salads for them.”

Murray said after dinner, the group brainstormed the idea together. They knew it was something Selma needed, but they were in need of a name for the business.

“We got on the Old Live Oaks Cemetery’s website and they have all the names listed — and we found Elodie. She was the half-sister of Mary Todd Lincoln, and she came to Selma,” Murray said.

During the time Elodie was in Selma, Carl Bowline of Madden & Associates explained, Dallas County was one of the top 10 places to live during the 1850s.

“Selma was really a growing metropolis, bigger than Montgomery,” Bowline said. “It was the queen city of the Black Belt, a hub for trade and everything else.”

It was a time when Selma was truly prospering, he said.

“Remember that Selma at the time, other than Richmond, Va., Selma was the greatest contributor of ammunitions for the Civil War. So at this time, Selma was a very loyal place to the Confederacy,” Bowline said. “So you have this lady who’s got — you can imagine walking Selma’s streets — with a tie in to Lincoln and what she had to go through. She had to be a very fiery and quick to retort kind of woman.”

That fiery spirit is one that caught the attention of Murray and one of the factors that ultimately contributed to Elodie’s namesake.

“Nathaniel Dawson (who eventually married Elodie)  first caught sight of Elodie Todd in the fall of 1858 on the streets of Selma; she was peering in the window of Mr. Clark’s bookstore and Dawson sized her up in a brisk walk by. Her bouncing black curls, then the essences of female fashion, made a particularly strong impression on him and he made the customarily discreet inquires as to her identity,” Murray read from All that Makes a Man: Love and Ambition in the Civil War South. “Elodie, he learned, was the sister of Martha Todd, now Martha White, a Selmian and an acquaintance of Dawson’s. Their brother-in-law, of course, was Abraham Lincoln.”

“She bridged this awesome gap,” Murray said. “We thought Elodie would be a good representative of this little tearoom idea that we wanted to do. She wasn’t a wall flower, she was out there.”

Elodie lunches has maintained their ties to historic Selma, naming all of the items on the menu after historic names in Selma — from the High Soapstone Bluff salad, which was the original name of the city of Selma to Kenan’s Mill salad and the Cahaba Twin sandwich, named after the old drive in theater.

At one point Elodie lunches were made fresh and served daily from the cooler inside of Carter’s, but Murray said that was too much.

“So now we are just [offering] it on Thursday and we serve about 100 lunches,” she explained, adding that tables are even set out each Thursday, giving people a place to sit outside of Carter’s and enjoy their fresh food.

Elodie staff member, Nikki Gilmore helps prepare all of the fresh ingredients and helps make the lunches each Thursday. Gilmore said she loves feeding people, and Elodie’s is a great way to do that in a healthy way.  And while Elodie offer’s several healthy options, Murray said the Weaver’s Grove salad, topped with strawberries and sugared pecans is definitely the most popular item on the menu.

“When we talk about Elodie, we talk in terms of a character. She’s a person from our history,” Bowline said. “It really is the fulfillment of the brand, to find that image and use it.”

Elodie lunches will now be marked with a photo of Elodie, which will in a way, bring her and her vivacious personality back to life.

“We had to get permission from the Old Depot in order to get it. Jean Martin was kind enough to let us come down there and crack the frame open — it was in the original frame — and Jean let us crack it open. We took the picture and now we’re going to use it on everything we do to brand out Elodie.”

“We’ve come to love Elodie and everything that she means. She has been a great edition to Carter’s Books & Gifts,” Murray said. “And I think the reason that I love Elodie is because we can keep it really beautiful. It’s good for you and we can keep it as a beautiful addition to Selma’s culinary landscape.”