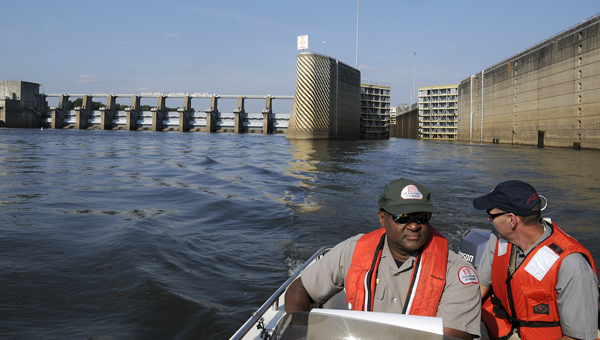 New Army Corps of Egineers regulations, controlling the flow of traffic along the Alabama River through the river’s locks and dams, went into effect beginning Friday, Feb. 1. -- Katie Wood

The schedule, created by the U.S. Army Corps of Engineers and released to the public in October, states that the locks’ operating hours will shift from seven days a week to four, and will increase by two hours a day for a total of 10 hours, effective Friday.
The new lock operations schedule permits commercial boaters to lock through 24 hours per day, seven days per week by scheduling an appointment. Recreational traffic can lock through in conjunction with maintenance operations.

“They made a compromise, and it’s not what anybody wanted,” Jim Felder executive director for the Alabama Scenic River Trail said. “It’s not what they wanted; it’s not what we wanted. But if you’ll look at the compromise it’s probably the one thing that they could choose that meant the least disruption of the least amount of people.”
Recreational traffic through the locks was originally reported in the Corps’ plan to be restricted entirely.

“I don’t want to paint too optimistic a picture, because there is a real downside to this, but at least a person with a boat is not locked into the ‘lake’ they live on,” Felder said. “The boaters of Alabama definitely lost some of their freedom, but it wasn’t the catastrophic event that it would have been if [those boaters] did not have the freedom to motor their boats between [locks at all].”

The plan implemented Friday, will allow non-commercial, recreational traffic through the locks only during the hours of lock operation, based on the availability of lock operators, and in conjunction with maintenance operations.

“There really hasn’t been that much traffic, so we don’t anticipate a whole lot of change,” said Pat Robbins, public affairs officer for the Corps’ Mobile District. “

Robbins explained the locks would no longer be opening for routine lockages.

“The only time someone can lock through is if we’re doing maintenance on the locks. Or if there’s a fish passage, which we don’t do this time of year, but we’ll be doing that later in the spring — so if something else is occurring, they can go through,” Robbins said. “And that’s why we urge people to call ahead and find out when those maintenance lockages are occurring, so they don’t show up and have to wait.”

So while there will be a member of the Corps operating each of the locks 10 hours per day, four days a week, Robbins said those people are there strictly for maintenance purposes. They will not be opening and closing the locks all day, he said. And in a previous interview Robbins explained that the savings under the new plan is expected to be about $500,000 a year.

“We are going from 10 lock operators down to four (on the Alabama River),” he said.

Jerry Sailors, president of the Coosa-Alabama River Improvement Association, said that while he hasn’t had an overwhelming amount of feedback on the new lock operations schedule, the prevailing feeling he’s received from stakeholders along the river seems to be that they are thankful to still have the opportunity to get through the locks at certain periods of time.

The locks will be staffed Monday through Thursday during the fall and winter months — October through February, and Friday through Monday during the spring and summer — March through September.

“[I’d encourage] people who do use that channel to take advantage of it while they are advertising that it would be made available,” Sailors said. “I think they need to take advantage of that, because the Corps is going to reevaluate down the line how they’re going to be able to manage this because of budgetary purposes. I know that the Corps is facing some additional budget cuts and they just can’t have somebody out there just to be waiting for (someone to lock through) as we have had it in the past.”

Sailors said people should lock through as often as they could, as the number of lockages is part of the criteria the Corps uses when reevaluating the locks levels of service.

“Based upon the historic record of the past three or four years, there hasn’t been enough (lockages on the Alabama River) on an annual basis that meets their minimum criteria. They arbitrarily set [that criteria] at 500 lockages a year, to allow a certain period of time that they could operate those things. But what they’re really looking for is — if you’re wanting to operate 24 hours a day — is to get 1,000 lockages a year,” Sailors said. “Now that’s a lot of lockages for some of these locks, considering we only did 150 to 200 before a year. So we must — the people who use those boating channels for recreation boats, they’re really going to have to start using them.”