With another successful season in the books, Selma native and Cincinnati Bengals defensive end Michael Johnson has continued the trend of improving his play year after year. 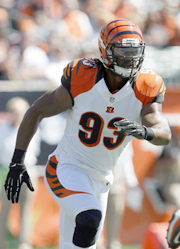 Johnson said he didn’t feel any pressure playing in a contract year, and was more focused on helping the Bengals turn it around after starting the season off 3-5, as Cincinnati was able to finish up the regular season by winning seven of their last eight games to clinch their third playoff berth in Johnson’s four seasons there.

“I really didn’t [feel pressure] because I put in the work in the offseason, I prepared my mind and body for the long haul, and I prayed on it,” Johnson said. “I started off the season having a good year, but what I was concerned about is the team wasn’t doing well. It’s okay to go out there and have individuals do good, but what I really wanted was to do well and also have the team do well. I was really glad we made the turnaround the way we did at the halfway point. We made the playoffs. We didn’t accomplish what we wanted to in the playoffs, but it was a real successful year.”

Johnson said he’s glad to see his hard work pay off and he’s glad to help the Bengals continue to improve, as they finished in the top ten defensively as a team and were second in the league in sacks.

But Johnson said he’s not content with this season’s success, as he’ll continue to work hard and improve just has he’s done each season since entering the league.

He’ll also be using the offseason to achieve one of his greatest goals — earning a college degree.

“I’m healthy, I’ve played in every game. I’ve only missed two practices. I’m just very blessed and thankful,” Johnson said, “and now I’m back in school taking three classes at [Georgia] Tech this spring. My degree is in business administration. I’ve got 18 hours and then I’m done. I’m taking ten right now. Out of everything I’ve done, including football, when I get my degree, that will be one of my proudest moments I’ve had in my life. That’s a big thing and Georgia Tech is one of the top schools in the country. To come out of there with a degree of completion, it’s going to mean a lot to me.”

After a career year, Johnson is now a free agent for the first time in his career, and while he’ll surely draw interest from teams around the league, he said he’s hoping to remain a Bengal.

“I would like to stay in Cincinnati. You can always find something wrong with your current position, but the grass is not always greener on the other side,” Johnson said. “This is the team that’s drafted me, they believed in me over everybody else, I’m embedded in the community up there, my teammates love me, the coaches and the owners. Everybody wants me to be there. I’m not against staying, whether that’s a long-term deal or if I was to get a franchise tag. However we can work it out, I would like to be a Cincinnati Bengal.”

Johnson said he’s built a strong bond with his team in Cincinnati.

“[Bengals leadership] and my agent are talking now and he sends me updates. From what he told me, they really, really want me back — the owners, the coaches, my teammates as well,” Johnson said. “We’ve developed a nice brotherhood amongst us as a team. That’s not always the case in every NFL locker room. We hang out together, we’re like high school teammates or college teammates. Our families hang out together, it’s a different environment up there.”

Johnson added he understands the nature of the league, but said he’ll leave his future up to faith and knows things will work out in the end.

“With that being said, it’s a business. I pray on it and I just believe that God’s going to put me in the situation that’s best for me team wise, community wise, money wise, all of that. It’s going to work itself out. I’m not stressing on it,” Johnson said. “It’s a fun time. It’s like coming out of high school again being recruited. Different teams want you. It’s a fun experience.”

Like millions of others around the country, Johnson will be tuned in to Super Bowl XLVII on Sunday.

With experience playing against the division rival Baltimore Ravens, including a 23-17 win in which he recorded two sacks to close out the season, Johnson said it’s going to be a physical matchup on Sunday.

“I don’t like making predictions, but I did predict the Ravens to beat the Broncos and the Patriots. I also predicted the Falcons to lose to the Seahawks, but they won,” Johnson said. “I want Ray Lewis to go out with a win, but the two teams are very similar. They both play great defense and they both run the football well, and in the NFL, that’s how you win games. It’s going to come down to who’s defense plays the best.”