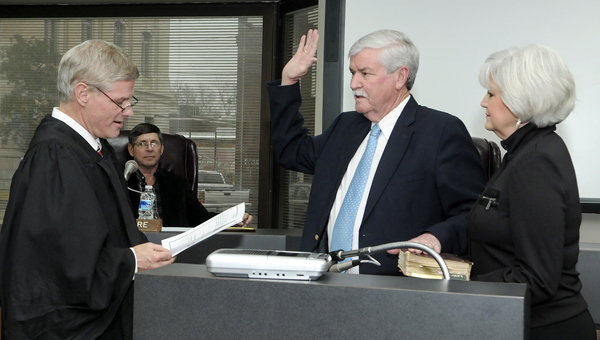 “There’s nothing keeping us from having another term of great challenges and great rewards,” Ballard addressed the commissioners after taking his oath of office. “I want to leave this county in great shape for whoever takes my place when I’m not here.”

As probate judge, Ballard said he has seen Dallas County take great strides in recent years and he plans to continue the county’s progress.

“Dallas County has a lot going for it,” he said. “This county, this city does not need to go back to where it was. And I thank everyone for the personal support, professional support and political support they have shown me. There are a lot of people who have contributed to the amazing success we’ve had in the last six years.”

Commissioner Larry Nichols along with the rest of the commission praised Ballard for his outstanding leadership.

“His leadership skills are beyond amazing,” Nichols said. “He gets along with everyone and he’s always been able to lead us the way we need to go.”

Commissioner Roy Moore agreed with Nichols and said Ballard has not only fulfilled his duties as probate judge, but exceeded expectations.

“He hasn’t done everything I expected,” Moore said. “He’s done more. He has the capability to pull us in together and address the issues. He’s not only my chairman and judge, he’s my best friend.”

Along with several city officials, Mayor George Evans also expressed his gratitude for Ballard and his strong commitment to Dallas County.

“I really appreciate his strong leadership,” Evans said to the commissioners. “Someone once told me ‘working together works,’ and that’s what we’ve been doing as a city and a county — working together.”

In addressing his next term, Ballard said Dallas County can only get better, and he has big plans for the people of Selma and Dallas County.

“We now have the best working relationship between the city and county that I can ever remember,” he said. “Let’s just have another great six years.”