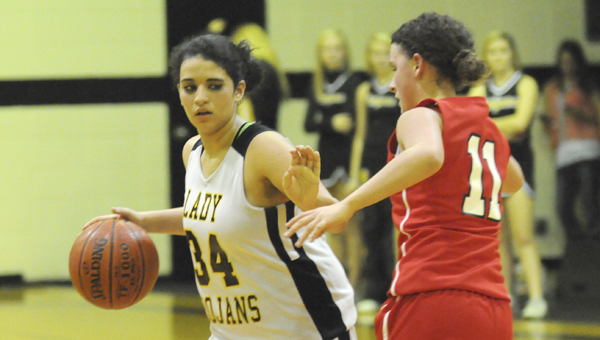 The Meadowview Christian School Lady Trojans couldn’t hold on to their halftime lead in Thursday’s 45-36 home loss to the Jackson Academy Lady Eagles.

“We just got a little complacent. We tried to go man-to-man and it just didn’t work,” McIntyre said. “Their No. 10 [Harvey] just started hitting shots. She changed things up and we didn’t adapt to it. They turned it on and we didn’t.”

The Lady Trojans held a 20-15 lead at the half, but the third quarter belonged to the Lady Eagles.

Meadowview’s Christina Dabit hit the second half’s opening shot to make it 22-15, but Harvey scored back-to-back baskets to make it 22-21 with 5:35 left in the third.

Meadowview’s Claudia Kendrick hit a mid-range shot to make it 24-21, but Harvey hit a jumper and scored on a three-point play to give Jackson a 26-24 lead with 4:00 left in the quarter.

Lyndsey Patton tied the game up at 26-26 for Meadowview, but Jackson’s Carlee Wade hit a 3-pointer that sparked a 13-2 run to help the Lady Eagles close the third quarter ahead 39-28.

Harvey pushed the Lady Eagles lead to 41-28 to open the fourth, but Dabit hit a free throw and Morgan Grantham hit a shot under the basket to make it a 41-31 game with 4:32 left.

But the Lady Eagles held the Lady Trojans to only five points the rest of the way.

Dabit and Kendrick led the Lady Trojans with 10 points each, while Patton had 8 points.

The Meadowvview boys and girls basketball teams will take the floor again on Jan. 14 on the road against Sumter Academy starting at 4 p.m.

Registration for the Selma Recreation Department’s youth baseball and softball leagues is set to begin on Jan. 14 at the... read more