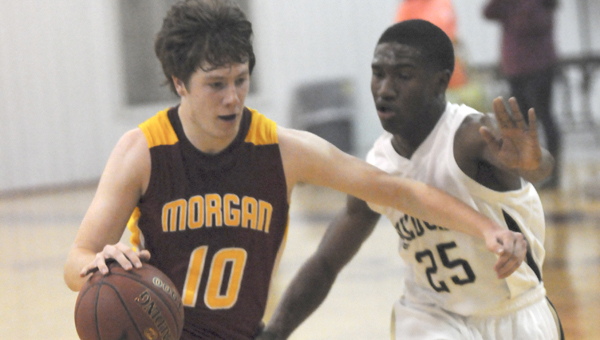 Morgan Academy’s Dalton Lee (10) tries to drive past East Memorial’s Jaylen McCoy during day two of the Morgan Pepsi Classic last Friday. Morgan is setting its sights on the second half of the season after the three-day classic. -- Robert Hudson

With the conclusion of the Morgan Pepsi Classic on Saturday, the Morgan Academy Senators are now setting their sights of the second half of the season.

Morgan defeated South Choctaw on day one of the classic before falling to East Memorial on Friday, but closed the event on Saturday with a 79-60 win over Sparta Academy in which the Senators hit nine 3-pointers.

Bob Taylor, head boys basketball coach of Morgan Academy (11-3), said he thought his team did well in the classic and hopes to use the momentum moving forward with the second half of the season.

“It was good. Overall, I think we did okay. I was not pleased with the way we played against East Memorial, not so much with the fact that we lost, but I wasn’t pleased with the way we played overall,” Taylor said. “I thought we played a lot better the next night against Sparta. We shot the ball a whole lot better and things just seemed to flow a whole lot better. I think it was good and I told our kids that it was kind of mini-season for us just to kind of get in the flow a little bit. We’re taking a few days off and we’ll come back in on the second and start getting ready for the rest of the season.”

Taylor said that one thing he hopes to improve on going into the second half is rebounding, as well as playing strong defensively.

“We’ve got to continue to work on boxing out and our rebounding,” Taylor said. “We’ve got to get back to playing good, solid defense like we were before the break, and I think part of that has to do with where we are right in the middle of Christmas.”

As for the classic as a whole, Taylor said he’s heard a lot of positive feedback from this year’s participants about the event and the city of Selma, and that the classic could become even bigger next season.

“As far as I know, everybody’s real gung-ho on coming back next year. A lot of the schools have said they want to be back in it next year,” Taylor said. “They really enjoyed it, enjoyed the town and I’ve heard a lot of compliments from the teams that stayed about the hotels and the restaurants here in town. I think it’s good for our town to have that many teams come in. I’ve had over schools contact me about possibly getting in next year, so it might be a possibility of it getting bigger as far as team wise next year.”

Morgan will play again at Wilcox Academy on Friday.