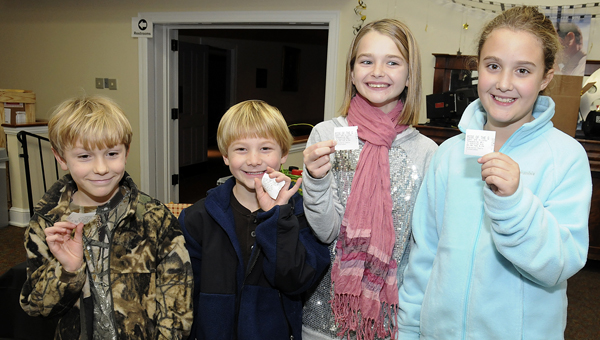 (Left to right) John Allen Ingram, Allen Lightfoot, Maggie Youngblood and Hannah Lightfoot all proudly display their tickets to see “The Rise of the Guardians,” the first movie The Selma Walton Theater showed since it closed temporarily for the holidays. -- Sarah Cook

After a brief holiday break, the Selma Walton Theater is up and running again with an exciting movie line-up for the New Year.

“We’re excited to be back,” said Sharon Diggs Jackson, who manages the theater alongside her husband David. “People have missed the theater and I think they’re excited about it opening back up too.”

The theater is kicking off it’s winter reopening with “Rise of the Guardians,” an animated film that Jackson said is sure to entertain families and children of all ages.

“We’ll show ‘The Hobbit’ next week which has been very popular and well received and then we’ll have ‘Lincoln’ and Arnold Schwarzenegger has a new movie coming out which we’ll show,” Jackson said.

The Walton will have a 2 p.m., 5.pm and 8 p.m. showing of Rise of the Guardian Saturday and a 4 p.m. showing Sunday. The theater will be open Thursday through Sunday the following week; it’s regular days of operation.

Jackson said since the theater is approaching its second year after it’s grand opeing, she and David are looking forward to taking the Walton to new heights and continuing the theater’s high-quality service.

“We’re just going to continue making improvements on the theater,” Jackson said. “Right now we’re trying to find more effective ways to let people know what’s going on at the theater so they can come out and enjoy it.”

Admission costs $7.50 for adults and $6 for children under age 12, and Jackson said this price is simply unbeatable.

“It’s a good value for your money,” she said. “”We just came back from California where we paid $11 to see a movie.”

Along with offering a good deal and quality service, Jackson also said that by viewing movies at the Walton, people are also supporting Selma.

“All of the revenue and things generated from the theater, it all stays right here in the city,” she said. “And the more people come downtown, the better off we are as a city.”

Jackson said she hopes everyone takes advantage of the Walton this season.

“We’re hoping that people will come out and just enjoy themselves again at the theater,” she said. “We’re looking forward to it.”

The suspect in the Christmas Day murder in Orville, Andrae Stallworth, is being held in jail without bond after a... read more