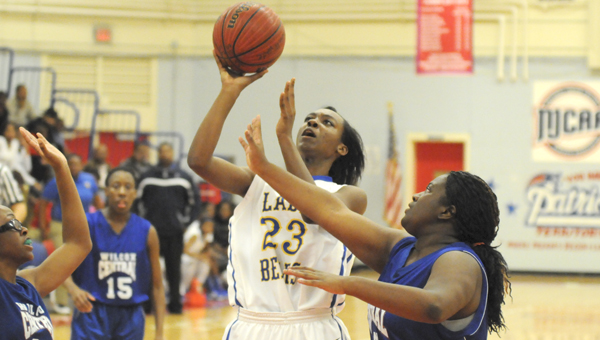 With the annual Dallas County Christmas Tournament in the books, there were some things area coaches were pleased with and others they thought needed work.

With the second half of the high school basketball season set to tip off in January, a month in which the bulk of area games that determine which teams go to the postseason are played, coaches saw some things in the tournament that could help them down the road.

The Dallas County Hornets boys (12-2, ranked No. 2 in Class 4A) defeated a pair of top-ranked teams in Class 4A’s Wilcox Central and Class 1A’s Keith to win the boys championship at the tournament.

And after Dallas County’s key player, 6’8 center William Lee, fouled out late in the title game against Keith, Hornets head coach Willie Moore said he learned a lot of good about his team’s character.

“We saw that we can battle through some adversity. Our post player went down with foul trouble and we were able to play some extended minutes without him,” Moore said. “Moving forward, that’s going to be good for us because we may be in this situation again and somebody else is going to have to step up.”

After the Keith Lady Bears (12-2, ranked No. 10) defeated the Southside Lady Panthers and the Wilcox-Central Lady Jaguars to win the girls championship, Keith coach Cecil Williams said he likes that his team was able to get a feel for different types of officials and see that some things they’ve been doing could earn them a whistle in the postseason.

“The best thing that we can take from this tournament is the officiating,” Williams said. “I told my girls that they really have to move their feet and not do a lot of hand checking and really just learn how to hustle more. Because the higher that we’re playing and moving up, we know how the officiating is going to be, so that was a good thing about the tournament.”

As for the Keith boys (9-5, ranked No. 1 in Class 1A), they defeated rival Southside before falling to Dallas County in the title game.

While the Bears still have a tournament left to play in Wetumpka before the new year, Keith boys head coach Tommy Tisdale said he liked the high level of competition in the Dallas County tournament that will undoubtedly prepare his team for area games.

“The mistakes we made, we can’t make them in Wetumpka. Or if we make them in Wetumpka, we shouldn’t make them in January,” Tisdale said. “The little things are coachable moments and moments that we actually go back and work on. We’ll go back, we’ll watch film and see what we didn’t do right and see what we need to adjust on. Also, to get in this atmosphere, in the 1A level you don’t see this competition, so if I keep my guys into it, we keep the intensity and keep our foot on the gas, I think we’ll be in decent shape. We’ve got a long way to go to get where we’re trying to be.”

Tournament hosts Southside boys (10-4, ranked No. 5 in Class 3A) lost to Keith and Wilcox, two games where they led nearly the entire way before losing the lead late in the fourth quarter.

Southside head boys basketball coach Cedric Brown said the tournament showed that the Panthers have to do a better job of closing.

The Southside Lady Panthers (6-7) fell to Keith before bouncing back against rival Dallas County.

“The things I can take away from this tournament moving forward is to be ready to play because regardless of who you are, your record or your standing, teams are going to be ready to play you whether or not you’re ready when you take the court,” Bothwell said. “The other thing is to capitalize on the opportunities. We all want to win in the tournaments, but just use tournaments to assess your team and see what can make you better in your area and in the regular season.”

The Dallas County girls (7-9) fell to Wilcox-Central and rival Southside in the tournament.

Charles Thompson, head girls basketball coach of Dallas County, said the Lady Hornets will just look to get to work to prepare for January.

“We’ll take this and hopefully we can get back in the gym and work to get ready for January,” Thompson said.