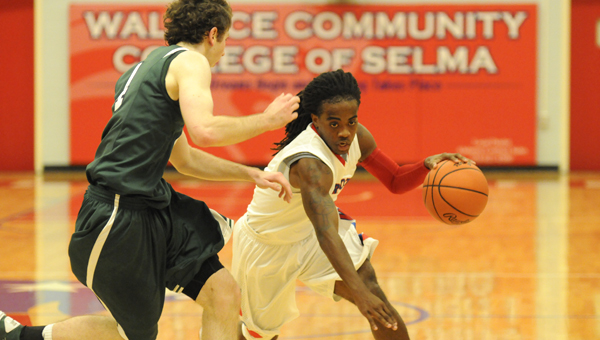 The Wallace Community College-Selma Patriots got within reach late, but ultimately fell short, as they lost 103-80 at home to the Shelton State Buccaneers on Wednesday.

Foster Davis, head men’s basketball coach of Wallace Community College-Selma (11-5), said his team was hurt by mistakes down the stretch.

“We missed a lot of free throws. Free throws got us,” Davis said. “A lot of charging calls on our part, and turnovers as usual.”

Wallace trailed 52-39 at halftime, but started to mount a comeback attempt halfway through the second half.

The Buccaneers responded with a 3-pointer by Derrick Hammer that made it 72-60, but Wallace’s D’Vante Mathews answered with a three of his own that put the score at 72-63 with 11:38 left.

Shelton’s Jacob Perry drove to the basket and scored on a layup that made it 74-63, but Wallace’s Henry Presley went 1 for 2 from the line and Mathews buried another 3-pointer that put the Patriots within reach at 74-67 with 9:06 left to play.

But Shelton’s Travis Daniels hit a pair of free throws and teammate Jeremy Watson scored in the paint, as the Buccaneers outscored the Patriots 13-3 in a three-minute stretch to push the Shelton State lead to 87-70 and helped them pull away.

Perry led the Buccaneers with 20 points, while Hammer had 16 points, and Watson had 15 points.

Presley added 16 points, while Mathews had 9 points for the Patriots.

Wallace will return to the floor on Jan. 10 on the road at Enterprise.

Wallace's Jonishia Jackson (12) goes up for a shot during Wednesday's game against Shelton State -- Robert Hudson The Wallace... read more