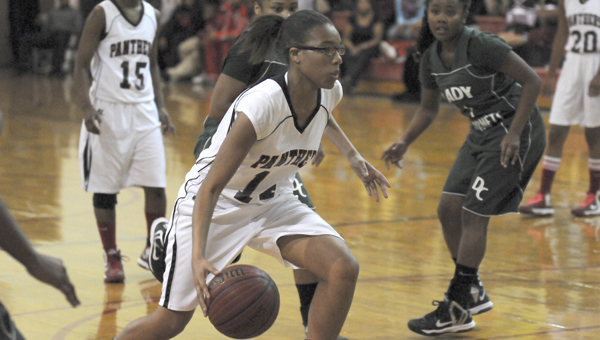 The Southside Lady Panthers were able to hold off the rival Dallas County Lady Hornets for a 55-49 win at home on Thursday in non-region play.

“With the type of start that we’re having, we’re trying to practice consistency in doing the right things. We’re still working on closing and completing games,” Bothwell said. “These girls are getting better week in, week out. It might not be at the pace that everybody wants to, but it’s at a pace that I’m satisfied with.”

The Lady Panthers came out of halftime leading 30-24 and proceeded to control the pace of the game.

With the score at 34-28 with little over six minutes left in the third, Chelsea Arnold and Calvondrea Blackmon hit back-to-back baskets to push the Lady Panthers’ lead to double digits at 38-28.

Dallas County didn’t fold, as De’Undria Boggs scored six of the last seven points for the Lady Hornets to bring the score to 45-36 going into the fourth quarter.

Dallas County continued to try and come back, as Moore hit a pair of free throws and Boggs scored on a mid-range shot to open the quarter and cut the lead to 46-40.

The Lady Panthers extended their lead on a fast break layup by Tanisha Blevins that made it 48-40 with 4:00 minutes left to play.

Boggs answered back with another jumper, but Blevins scored at the basket again to make to 50-42 with 2:28 left.

Boggs added a free throw to make it 50-43, but Blevins countered again with a basket of her own to push the score back to 52-43 with 1:24 left, securing the win.

Blevins led Southside with 18 points, while Ki’Onna Likely had 17 points for the Lady Panthers.

Boggs had 22 points for Dallas County, while Moore had 13 points.

Southside will play again on Friday against Ellwood at Wallace Community College starting at 5 p.m., while Dallas County will travel to Billingsley and start at 6 p.m.

The No. 2 Dallas County Hornets seized the momentum to close the first half and controlled the pace of the... read more