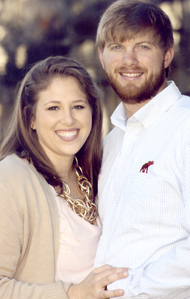 Jorgianne earned her Bachelor of Science Degree from The University of Alabama, May 2012 and is currently enrolled in the nursing program at Wallace Community College, Selma, Alabama.

Cody graduated from The University of Alabama in December 2011, where he earned a degree of Bachelor of Social Science in Education.

The wedding is December 29, 2012 in Tallahassee, Florida.

All dolled up: Selma native makes career dressing up…