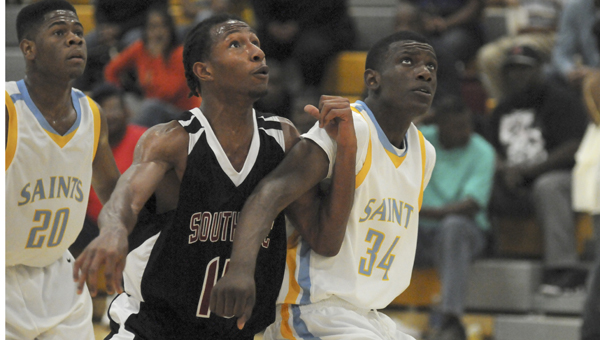 In the first meeting of the season between area rivals, the Southside Panthers fought back from a halftime deficit to grab a thrilling 98-86 overtime win over the Selma Saints in day two of the Selma Thanksgiving Tournament on Friday.

Cedric Brown, head boys basketball coach of Southside (4-0), said his team never gave up after trailing at halftime and with seconds left to play.

“They were resilient. My team, they never quit. We went down 12 at the half and we talked about meeting goals, and we met our goal for the third quarter,” Brown said. “I told them that if we win that third quarter like we should, then we’ll come out on top on the night. They believed in me all night and I believed in them. They played to the very end.”

“We just had more mistakes than they did, and basically they wanted it more,” Jackson said. “They really, really beat us on the offensive boards.”

After trailing 44-32 at the half, the Panthers fought back in a third quarter that included three 3-pointers by senior Sammarkus Jones, as Southside entered the final quarter tied 56-56.

Southside took a 58-56 lead at the start of fourth quarter, as Jeffery Mack hit a shot under the basket.

But Southside’s Octavios Gulley hit a shot in the paint after an offensive rebound to help Southside reclaim the lead at 63-62.

Southside chipped away at the Selma lead, outscoring the Saints 15-8 to make it an 80-78 game with 55 seconds left.

A foul by the Saints sent Southside’s Derick Daniels to the line, who then proceeded to hit two clutch free throws to tie the game 80-80 with 42 seconds left.

Selma’s Devontae Rembert went to the line, hitting one of two, and Southside’s Je’von Hall did the same to make it an 81-81 game.

Southside had the ball with 2.1 seconds left after a Mack steal.

The Panthers had a chance to hit the winning shot, but Mack’s shot was altered, as he missed, sending the game to overtime.

Southside, took control and never let go in the overtime period, after a free throw by Selma’s DeMario Gunn put the Saints up 82-81, Daniels hit a shot under the basket to give Southside the lead again at 83-82.

Southside proceeded to go on a 8-0 run to stay ahead for good, as they Saints were forced to foul in order to extend the game, with Daniels hitting four free throws in overtime for the Panthers.

Jones led the Panthers with 26 points, while Gulley had 22 points, Robert Sullivan had 16 points, Mack had 12 points, and Hall and Daniels each had 10 points for Southside.

Gunn led the Saints with 22 points and 6 rebounds, while Ford had 19 points, 3 rebounds and 5 assists.

Games will resume on Saturday at 2:30 p.m. at Selma High School, starting with Leflore against St. Jude, followed by Selma versus Lanier at 5 p.m. and Southside against Wilcox at 7:30 p.m.

The Selma High School Saints basketball team is continuing an event this week that’s becoming a bit of a holiday... read more