The Selma High School Saints basketball team is continuing an event this week that’s becoming a bit of a holiday tradition in itself.

The Saints will host their annual Thanksgiving Basketball Tournament starting on Thursday at 4 p.m. and ending on Saturday. 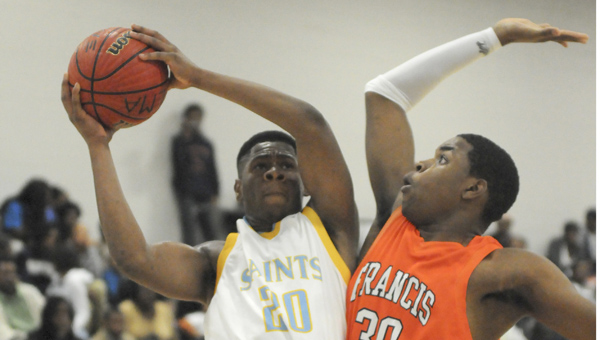 Selma High School’s Devontae Rembert (20) goes up for a shot against Francis Marion’s Juan Brooks during a game earlier this season. The Saints will host local schools Southside and Dallas County High School along with schools from the Montgomery and Mobile areas for their Thanksgiving tournament. --file photo

The tournament will kick off on Thursday with four games, then continue on Friday starting at 9 a.m. and then conclude on Saturday with games starting at 12 p.m.

Woodie Jackson, head boys basketball coach of Selma High School, said the tournament will include a mix of teams from all around the state.

“We have Leflore out of Mobile, St. Jude and Sidney Lanier coming from Montgomery, Choctaw County coming from Butler, Alabama, and Southside of Selma,” Jackson said.

Jackson added the tournament will also include the late addition of Dallas County High School, as well as Wilcox-Central High School.

Jackson said the tournament is becoming an annual tradition, and it offers the teams involved a chance to face varied styles of competition.

“This is my fifth year here and the fifth year that we have had the Thanksgiving Tournament. It has gone real well,” Jackson said. “It gives you a variety of teams. We try to get them from different sections of the state, so that you’ll see different styles of play. You’ll play against bigger, sometimes, competition, but not necessarily better because here in our area we have some of the best teams, I feel, competition wise in the state of Alabama. But you do get a chance to play against different people.”