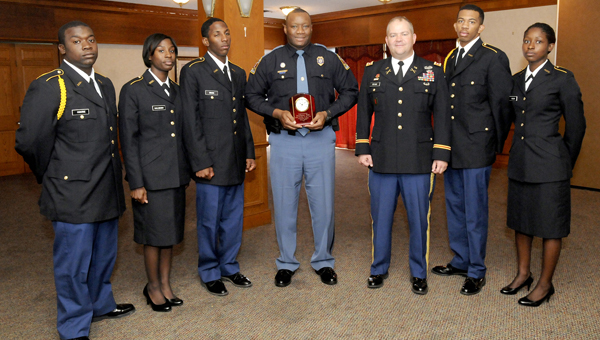 The ROTC program at Concordia College Alabama took time Thursday to recognize and honor Trooper Christopher Fails, who was recently named Trooper of the Year by the Alabama Department of Public Safety.

Fails was assigned to the Selma Post in June of 2004 and since then has proven that he is a hardworking resident dedicated to serving the city of Selma.

“We just wanted to take out some time to honor him for all his hard work,” said Lt. Col. Sean Ryan during an honorary luncheon at the Selma Hotel.

Fails has served as a traffic homicide investigator and field-training officer for the city of Selma for more than five years. He entered the army in 1983 and has served in Operations Just Cause in Panama and Desert Storm / Desert Shield. After his army service, he became a career recruiter for the army until he retired as a sergeant first class in June 2003.

After receiving the award, given by Ryan, Fails said he was humbled and honored for the recognition.

“As I stand here today I’m humbled both as a soldier and a trooper,” Fails said. “This is one of the most prestigious awards I’ve ever received because it came from a department which I came from and gave me the roots to be here today.”

Ryan said he, along with the other officers who attended the luncheon, were especially appreciative of Fail’s service because they live in the area and are affected by his outstanding performance.

“For us as soldiers, he’s one of us in that he spent a period of his life serving and now he’s retired and serving the people of Selma and the people of Alabama,” Ryan said. “He’s dedicated his whole life to serving others and putting his own life in front of others.”

During his time serving at the Selma post, Fails has consistently had the highest activity and contact average along with the most alias warrant arrests.

“That says a lot about the kind of guy he is,” Ryan said. “I appreciate all he’s done and all he continues to do for us.”