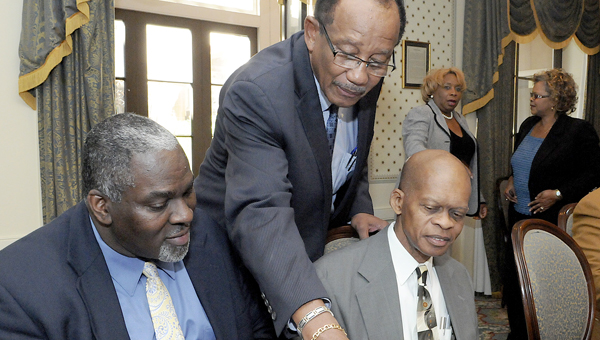 In May Ashley Moore, then a graduating senior from Morgan Academy, accepted the $1,500 scholarship, the Mayor’s Inspirational Achievers Award. With the help of the scholarship Moore now attends Auburn University.

The scholarship and award program, now in its second year, kicked off Tuesday at the St. James Hotel where Mayor George Evans announced he wanted to see more success stories like Moore’s — young people who achieve and work hard getting rewarded with a scholarship from this program.

Evans and his administration brought in committee members for the program as well as Selma City School administrators to discuss this year’s scholarship program at the hotel. The group discussed fair ways to evaluate students who apply for scholarships and awards as well as tips, suggestions and ideas for the upcoming year of the program

“My goal this year would be to give three seniors $1,000 each,” Evans said. “We also want to find ways where children are just dying to turn in these applications so we want to give them incentives. The impact of the program last year sent a strong message to the community and to the parents.”

In addition to scholarships and medallions given to students in May at the awards banquet, three students went home with Kindle Fire tablets as a prize just for attending and going through the application process. Evans said he hopes to replicate that incentive again, this time with Kindles or even iPad minis to be given away.

Dale Bryant with Ellewood Christian School and an organizer for the MIAA said, “That anytime there is a packed house at a banquet, we are moving in the right direction. We need to show we are moving beyond in Selma by giving more opportunities.”

It was announced in the meeting that some changes have been made this year to the application process. Students who reside in Dallas County can still apply but students must attend a school in the Selma City system. Applications must be received by the MIAA by April 16 to be considered for an award.

Students must complete essays as well as general personal information for the applications. The first essay question asks students about what obstacles, physical, mental or social, they have overcome and what impact that obstacle had on their life. The second essay question asks students what their vision for the city of Selma is, and what role they feel in helping to achieve that vision for the city.