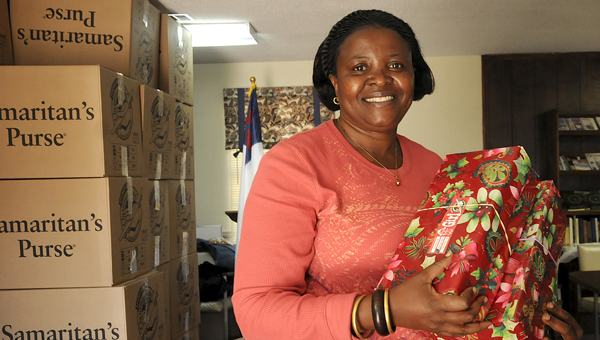 Faith Kunihira has traveled from her home country of Uganda to help Benton churches package boxes for Operation Christmas Child program. Kunihira is the founder of HomeAgain orphanage, which receives boxes from the program each year. -- Sarah Cook

For their annual Operation Christmas Child program, Benton residents have been teaming up with someone who has traveled all the way from East Africa to see “the other side” of a project that benefits many.

Faith Kunihira, a native of Uganda and founder of HomeAgain orphanage, has been spending the last three weeks in the United States. She came to help package boxes for the Operation Christmas Child Program, a program that brings endless smiles on Christmas day to more than 80 orphans in the village of Kaihura.

Kunihira said she travels to the states every year because “these people give their time and energy to do this project, and the recipients need to understand that.”

“My nephew lives over there right next to the orphanage and they’ve been there almost five years now,” Jones said. “To see what the orphanage has done for the community, for the kids, it’s so overwhelming.”

Since Kunihira has been in the area, Jones said she along with other church members have packaged about 1,000 boxes for the program. And she expects to double that number by the end of the week.

“Just knowing that some of the shoeboxes will end up in my country, that’s an amazing thing,” Kunihira said. “It’s such a great experience too to come back here and see the other side of the people that pack the shoeboxes and see what the churches are doing.”

Kunihira said when the children at HomeAgain first open their boxes, the reactions are priceless.

“Some of these kids have never even see a tooth brush,” she said. “Or sometimes they’ll think that Play-Doh is food and we’ll have to tell them it’s not edible.”

Kunihira will travel to Atlanta next week to meet more church members and pack more boxes.

“These boxes come with commitment and a Christian attitude,” Kunihira said. “And my country is very grateful for that.”

For more information on the HomeAgain orphanage and Kunihira’s other programs, visit www.bringinghope.org.