Buddy up for our veterans 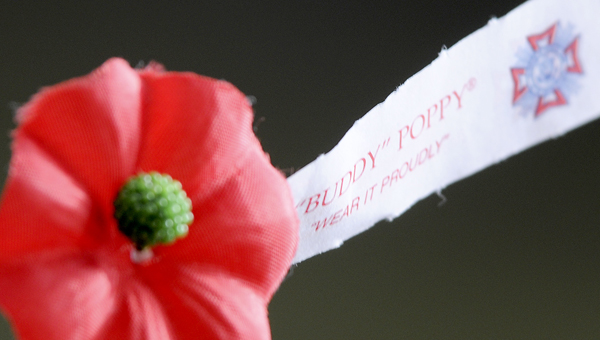 Members of the local Veterans of Foreign Wars along with its ladies auxiliary and local Jr. ROTC cadets will begin their annual Buddy Poppy Sale Saturday at locations throughout Selma.

In 1922 the poppy was adopted as the official memorial flower of the Veterans of Foreign Wars. Today the poppy is still seen as a memorial flower, and will be the main attraction of the Buddy Poppy Drive, sponsored by the local VFW and the members of its ladies auxiliary of Selma along with the Jr. ROTC from local high schools.

The small red paper poppies are made by disabled veterans in veteran’s hospitals and will be given away at eight locations in Selma on Saturday, Nov. 10 between 9 a.m. and noon, including the two Winn-Dixies, the Tractor Show in Orrville, the Dollar General on U.S. Highway 80 and the Selma Flea Market.

“We contact local businesses around the area and ask them for permission to have representatives there, and we give out buddy poppies,” Patty Stone, an auxiliary member said. “We don’t charge for them, we don’t sell them, we just give them out and people can make donations to the Veteran’s of Foreign Wars to the relief fund.”

The donations are deposited into a relief fund and used for many different things Stone said, including buying flags for schools, giving monetary assistance to veterans who need help paying bills and for the families of deceased veterans donations are used to help buy food.

“Whatever they need,” Stone said. “We do what we can to help the veterans.”

“The people of Dallas County and surrounding counties are usually very, very supportive of the Buddy Poppy Drive,” Stone said. “Everybody is familiar with it, and they’re always ready to make donations.”

And even if no donations are made on Saturday, the money that was spent purchasing the flowers is donated to the veterans who made them.

“We buy the buddy poppies from national headquarters,” Rod Stone of VFW Post 3013 said. “When we buy them, they redistribute that money and give it to the veterans who made them. If we give away 1,000 Buddy Poppies and we don’t get $1 in donation, then we still donated to the veterans in the nursing homes, just by buying the poppies.”

The drive is so important, Patty said, because “it’s for the veterans. They’ve given so much, for everybody, for us to live free. And there’s so many that come back who are injured and who are hospitalized and forgotten,” she said. “We love to be able to do this so that we can give back to the veterans.”

School board looks at bidding process

Several questions have come up at recent Selma City School Board work sessions and again at Thursday’s meeting, as to... read more