Dallas County voters back Obama as he is re-elected 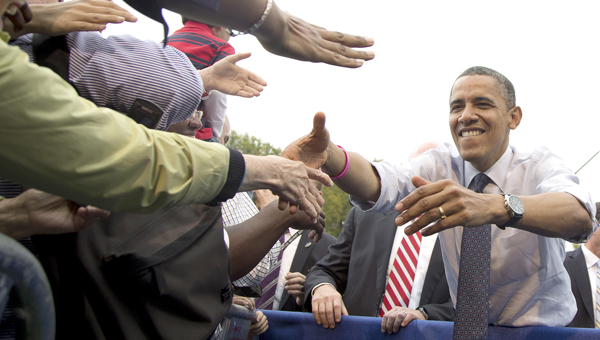 President Barack Obama stretches to shakes hands after speaking about the choice facing women in the upcoming election, Friday, Oct. 19, 2012, at a campaign event at George Mason University in Fairfax, Va. --AP Photo

The voters of Dallas County turned out in huge numbers Tuesday to cast their votes in a number of national, state and local issues, none of which was bigger than the race for President of the United States.

In the end, voters on the national level too supported Obama, as he earned re-election.

Dallas County’s turnout Tuesday was larger than that in 2008. Obama received 69.7 percent of the vote in Dallas County.

Suzanna Ingram, chief clerk of the probate office, said she was impressed with the amount of residents who exercised their right to vote in Dallas County.

“This has been a great turnout and I’m very pleased with our county,” Ingram said before the official numbers was announced. “I believe this could be the greatest turnout ever in Dallas County.”

As residents left county polling places, some voiced their favor for Obama, saying he is the right choice for Selma and the nation.

“We want Obama back in here because he has a heart for the people,” said Louise King as she left her voting precinct. “We need him. The rich keep getting richer and the poor keep getting poorer.”

For other residents, Tuesday marked a special day, as it was their first time to voice their opinion and vote. Andre Blake and his brother, Travon, both went to the polls for the first time.

“The way the economy is today, we need a president who will stand up for us and our community and help everyone,” Andre said. “The poor, the elderly, the rich — everyone.”

For Cynthia Hatcher, education was the main motivator for her to cast her ballot.

“Our kids are our future and I believe that’s the most important thing right now,” Hatcher said after casting her vote. “My main concern is our children and our future.”

Cordavius Rogers, a freshman at Concordia College-Alabama, said he felt confident in his candidate of choice.

“I feel good [about my decision],” Rogers said. “I watched the first two debates, and I just wanted to exercise my right to vote.”

Kenneth Grimes and Kalima Muhammad make sure their robot is ready for competition Saturday at the South’s BEST competition held... read more