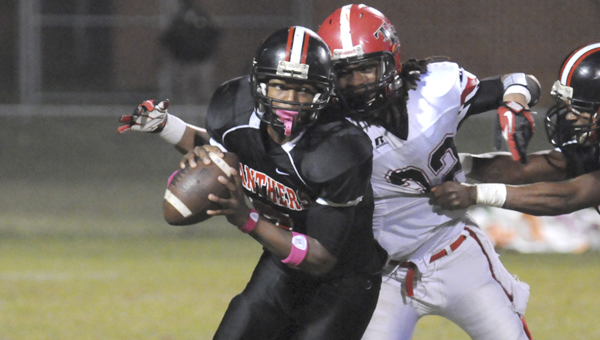 Southside quarterback Khamari Gibbs tries to escape the pocket during a game earlier this season against T.R. Miller. -- File Photo

With the final week of the season on the horizon, a pair of local rivals are throwing out the records and preparing for their annual battle.

Chris Littleton, head football coach of Dallas County High School, said the familiarity is what makes the rivalry so big around the county.

“It means a lot and it’s a big game. The kids, a lot of them grew up knowing each other and played city ball together and stuff like that,” Littleton said. “The kids respond to it on both sides. We’re expecting a battle out there. Both teams bring an extra gear, extra intensity.”

Daniel Flowers, head football coach of Southside High School, is entering his first-ever game against Dallas County as Panthers head coach, but he understands the intensity the rivalry brings.

“They’re not going to quit, they’re going to fight you the whole game,” Flowers said. “With the talent and the advantage they do have with being at home in their own confines, they’ll play a good ball game. You don’t look at records in a rivalry game. They’re going to come out and play us hard just because we’re Southside.”

Littleton said the Panthers are an athletic team, and the Hornets will have to play solid all around to win.

“They’re very athletic, very well coached and disciplined defensively,” Littleton said. “Offensively, they’ve got the ability to score at any time. We’ve just got to play sound defensively and take care of the football.”

Flowers said his seniors have to give their all and the Panthers have to play assignment football in order to get the victory.

“We’ve got to take care of the football, run hard and everybody just do their job,” Flowers said. “Like I told my seniors, this is y’all last game, so play lights out. This game, if we finish, we can win.”