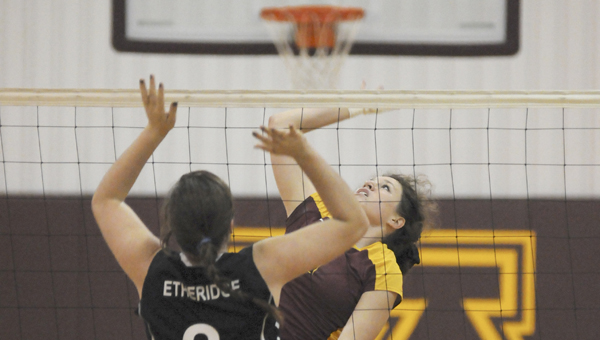 The Morgan Academy Lady Senators swept both of their opponents at home on Tuesday to advance to the Alabama Independent School Association Final Four.

“It means a lot to us considering our main goal was to go to the final four. Now we can go in as the No. 1 seed. We can hold our heads a little bit higher going into Saturday morning,” Moore said. “We have to go in ready to compete against the other region.”

In game one against Tuscaloosa, the Lady Senators dropped the opening set, but charged by and took control to win the final three sets.

Moore said the Lady Senators got off to a slow start against Tuscaloosa, but soon got their feet under them, avoiding elimination.

“The first game it was like we were scared to even make a move. We were trying to be careful, scared to mess up,” Moore said. “I told them that they had to put the ball down and put it into play. Tuscaloosa’s defense is very strong, and if they wanted to score against them and win the game, they had to put it back over and put it down hard. If they lost this game, season was over, and we didn’t want it to be over.”

After defeating Tuscaloosa to secure a spot in the final four, the Lady Senators took on Kingwood and took the first set.

Morgan’s Megan Leigh Siddens spiked the ball to the center of the Kingwood defense to push the Lady Senators’ lead to 24-22 and keep them ahead for good.

The Lady Senators will head to Faulkner University in Montgomery as one of two No. 1 seeds and will face the loser of Macon East and Lee Scott Academy on Saturday at 11 a.m.

Though Morgan was able to advance through the region tournament without a loss, Moore said there’s still room for improvement before heading to state.

“We’ve definitely got to work on defense and coverage for our hitters,” Moore said. “I’ll be stressing serving because serving won this game for us. And anticipation, we have to work on our anticipation. It’s gotten better throughout the season, but that’s a few of the key things we need to work on.”

Troy football coach Blakeney reflects on past, future of program