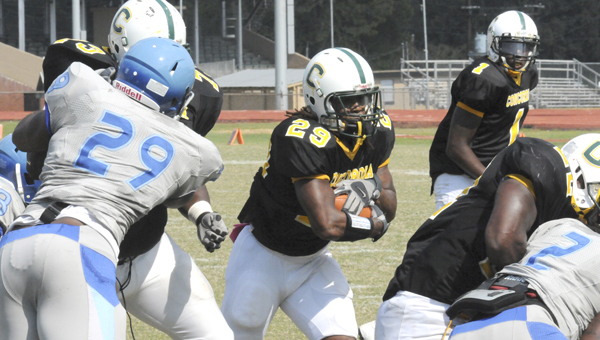 Concordia running back Treval Adams runs for a touchdown during the second quarter of Saturday’s game against the Virginia-Lynchburg Dragons at Memorial Stadium. -- Robert Hudson

The Concordia College Alabama Hornets fell behind early at home, but were not fazed, as they defeated the Virginia-Lynchburg Dragons 20-7 on Saturday at Memorial Stadium.

Don Lee, head football coach of Concordia College Alabama (4-1), said his team displayed a lot of character after falling behind 7-0 early at home.

“It’s really unbelievable the way they’re coming together and gelling together, and they’re believing in themselves,” Lee said of his team. “Even though that one play could have went down, they turned it around and fought back. And that just says a lot about their character and their integrity right now.”

The Dragons got on the board early when Dontra Matthews picked off Concordia quarterback Keith Ray and returned it to the Hornets’ 30-yard line before pitching the ball to teammate Keith Lewis at the Dragons’ 30-yard line as he was going to the ground. Lewis returned the ball the rest of the way for a touchdown that gave the Dragons a 7-0 lead after the extra point, with 7:25 left in the first quarter.

The Hornets struck back with 2-yard touchdown run by Terrell Edwards-May that capped off a long drive and made the score 7-6 after a missed extra point with 4:02 left in the first.

After an interception on defense by Concordia’s Shawn Sweet, the Hornets proceeded to march down the field and score on a 2-yard touchdown run by Treval Adams that, after a successful extra point, gave Concordia a 13-7 lead with 1:13 left in the first half.

The Hornets’ final score of the game came in the third quarter when Christopher Davidson ran in a 2-yard touchdown.

Stephan McCord and Christopher Davenport each also had interceptions for the Hornets.

Concordia will take the field again next Saturday on the road at Fort Valley with a kickoff time of 2 p.m. The Hornets return to Selma for homecoming on Nov. 2.