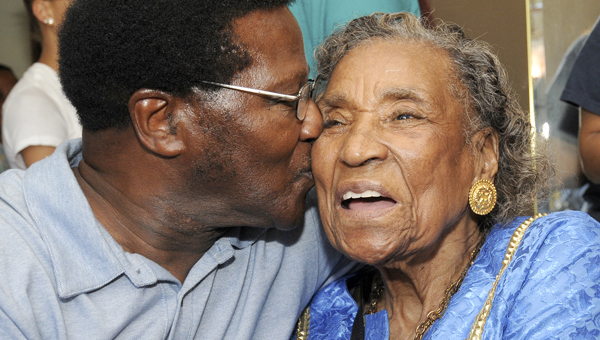 Joe Jones gives Amelia Boyton-Robinson a kiss on the cheek after the two met Saturday at the National Voting Rights Museum and Institute. The two were the subjects of an iconic photograph taken on Bloody Sunday and they had not seen one another since the photograph was taken on March 7, 1965. -- Katie Wood

They say a photograph is worth a thousand words. Unfortunately for the subjects of an iconic image captured on Bloody Sunday, not even the first word had been exchanged with one another since the photograph was taken on March 7, 1965.

That all changed Saturday when Amelia Boynton-Robinson and Joe Jones were reunited at the National Voting Rights Museum and Institute.

Boynton-Robinson and Jones shared memories of the day they were photographed together, roughly 50 yards from the museum sits today. 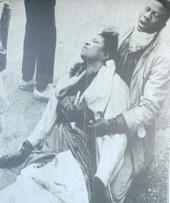 The photo, which shows an unconscious Boynton-Robison being held by Jones, moments after she was beaten by law enforcement officials attempting to break up the first Selma-to-Montgomery march. Jones was only a high school senior at the time.

“I was scared and young,” he said.

Boynton-Robinson was lying on the ground. Jones saw her and tried to help.

“I just thought … ‘I hope she’s not dead,’” Jones recalled. “I was going to do anything that I could to saver her or help her.”

Boynton-Robinson did not know or remember the man in the photo. They had never met.

“For 40 years I had been looking for him to find out who he is, and where he was,” Boynton-Robinson said. “I didn’t see him. He tried to pick me up and I was unconscious, and I didn’t see who it was.”

When she saw him for the first time Saturday, now knowing exactly who he is, “my heart just felt like I’d found one of my children,” she said.

Jones said he was excited to reunite and finally meet with Boynton-Robinson after all these years.

Boynton-Robinson looked at Jones and said the words she’d been waiting to say for 47 years. “Thank you so much,” she said. “[You] really saved my life.”

The pair reunited after Jones’s daughter saw the iconic photo posted on Boynton-Robinson’s Facebook page, in early September asking for information about the man.

“She contacted us and said, ‘My father’s the one in the picture,’” Shawn Eckles, who manages Boynton-Robinson’s Facebook page said.

Was Early College doomed from the beginning?