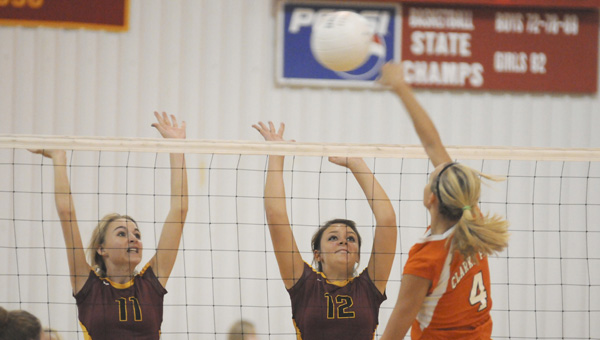 In one of their toughest tests of the season, the Morgan Academy Lady Senators knocked off the top team in the Alabama Independent School Association at home on Tuesday.

“The key was just knowing that we had to pull this one out. We needed this win to see where we were in the season,” Moore said. “We knew if we could win this one, we could move on from here and try to come out on top of our region. We just really wanted to get this win. I’m very proud of the way they played.”

The Lady Senators controlled the first set, as they never trailed to finish it off at 25-21, while Clarke took the second set by staving off a late Morgan comeback after leading the entire set.

Morgan regained control in the third set and won 25-19, but the crucial point in the match came late in the fourth set with the Lady Gators trying to push the match to a deciding fifth set.

After tying the fourth set at 21-21, Morgan took the lead when Lauren Yeldell set the ball for Ashley Friday, who spiked it in the center of the Lady Gators’ defense and put the Lady Senators ahead 22-21.

But Clarke wouldn’t go away, as the teams fought back and forth, eventually tying the match at 24-24.

Morgan went ahead again when Laigan Godwin spiked the ball off a pass and made it 25-24.

Just one point away from sealing the set and match victory, Morgan couldn’t put away the Lady Gators, as they tied the match again.

Clarke put the Lady Senators on the ropes later in the set when Morgan hit the ball out and put the Lady Gators ahead at 27-26, just one point away from forcing a fifth set.

But the Lady Gators hit the ball out on the next possession and put Morgan right back in the match at 27-27.

The Lady Senators took advantage of the momentum, as Megan Leigh Siddens spiked a pass from Yeldell on the next possession to give Morgan a 28-27 lead.

The Lady Gators failed to return the Lady Senators’ next serve, closing out the match.

Siddens, one the Lady Senators’ senior captains along with Godwin and Lauren and Lindsey Yeldell, said it’s a big win for Morgan.

“It meant a lot to us to really beat this team because they were No. 1 and it gives us a lot of confidence going into the rest of the games this season,” Siddens said. “We’re just excited and we’re hoping to go far this year. That was a real big win for us.”

Godwin said the win could hopefully provide momentum for the Lady Senators moving forward toward their goal of going back to state.

“We’ve come a long way this year. We’ve been fighting hard for it,” Godwin said. “We’re playing, hopefully, going to the final four. Hopefully we’ll get there if we keep working hard.”

The Lady Senators will take the court again Thursday at 4 p.m. at Fort Dale Academy.

After a 23-18 loss in Charlotte, N.C. against Johnson C. Smith on Saturday, the Concordia College Alabama Hornets will look... read more