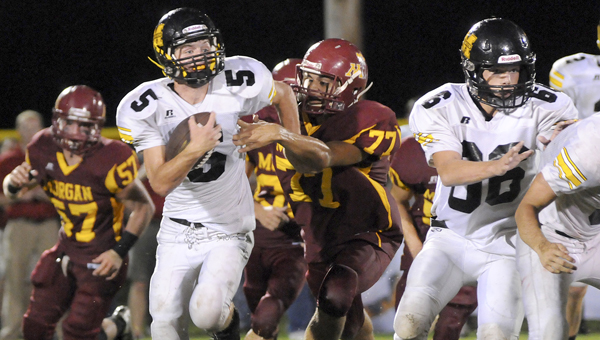 The Morgan Academy Senators took control early and never looked back, as they rolled to a 61-12 victory over the Meadowview Christian School Trojans in the first meeting between the two teams since 2005.

Bob Taylor, head football coach of Morgan Academy, said the Senators (2-0, 1-0) did a good job of executing their game plan.

“We did okay. We ran our offense very effectively and we did a good job of getting outside and getting to the edge, which is what we kind of want to do,” Taylor said. “Defensively, we played well. Meadowview moved the ball and did a good job there a couple of times against us. I was pleased with our overall effort. We came out focused and ready to play.”

Meadowview head football coach Lebo Jones said the Trojans (0-2, 0-1) were hurt by a lack of depth.

“We didn’t have the numbers to stick with them with all of our injuries,” Jones said. “Lack of depth really hurt us tonight. We played hard, we just got beat by a better team tonight.”

The Senators got on the board early after recovering a Meadowview fumble, when Harrison Watters broke to the outside on a handoff for a 12-yard touchdown.

Lauren Rutherford tacked on the extra point to make it a 7-0 game with 7:37 left in the opening quarter.

The Senators kept the momentum going when Jamie Bearden broke on a 69-yard run to help push Morgan’s lead to 14-0.

Morgan wasn’t done in the quarter, as Matt McKinney pounded in a 1-yard run to make it a 21-0 game.

Senators’ quarterback Dalton Lee made it 27 unanswered points when he found Wyatt Sims wide open on a corner route for a 25-yard touchdown pass with 9:15 left in the second.

The Trojans finally got on the board with 4:14 left in the second when quarterback Seth Taylor capped off a 60-yard drive, which included two 15-yard penalties by Morgan, with a 1-yard sneak up the middle, making it a 27-6 game.

But Morgan answered right back, as Bearden scored on a 32-yard touchdown run, capping off a drive that started with a blocked punt by teammate Clay Copeland, as Morgan took a 34-6 lead into halftime.

Morgan’s Woodhum Kimmer also added two touchdown runs of 40 and 60 yards in the second half.

Taylor Haskell scored Meadowview’s only other touchdown on a 12-yard run with 3:28 left in the fourth quarter.

Bearden led the Senators with 197 yards on the ground and Kimmer added 111 yards rushing, as Morgan racked up more than 500-yards of total offense.

Meadowview had 150 yards of total offense during the game.

The Senators will next travel to Camden to face Wilcox Academy on Friday at 7 p.m.

Meadowview will travel to Eastwood on Friday with a 7 p.m. kickoff.

The beginning of a new season means another meeting between cross-town rivals. The Selma High School Saints will face the... read more