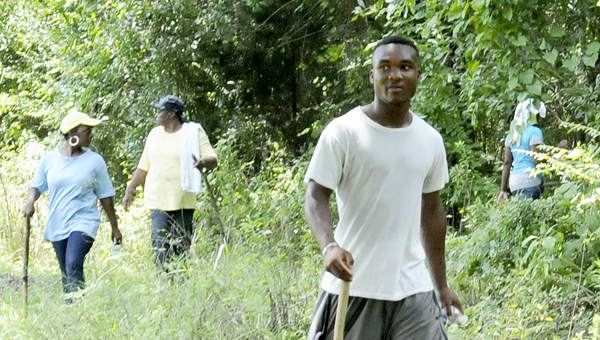 Friends, family and Beloit community residents have taken part in numerous searches for Adline George, an 89-year-old Beloit woman who has been missing since July 31.

Next Sunday Adline George, an elderly woman from the Beloit Community, should be celebrating her 90th birthday. But instead of blowing out candles on a birthday cake, at a party her children planned for her months ago, her children will light candles at a vigil in her honor. In patient prayer they are hoping for their missing mother’s return but bracing themselves for closure if they were to discover the worst — her remains.

“Whatever God’s will might be we will pray for that,” Mamie George, Adline’s daughter said Friday about the ongoing investigation. “If she’s not alive, we are willing to deal with that too, but we just want to find her. We still aren’t giving up. We are going to do something everyday and call somebody everyday and keep looking for her. This is my mother and someone we love dearly.”

George said she and her family have put flyers announcing a $2,000 reward from county to county, even going as far as Prattville.

“Yes our faith is strong so we are still believing this is God’s will,” George said. “We are willing to accept whatever but we definitely want to find her to get closure.”

Sometime on July 31, 89-year-old George went missing. Her family says she would often walk up to two miles a day but is an Alzheimer’s patient and takes medication for diabetes.

“No new developments, same old, same old,” said Sgt. Mike Granthum, with the Dallas County Sheriff’s Department. “We have already searched a 10-mile radius, and have been to the Gees Bend area and places she frequented as a kid because of her Alzheimer’s.”

Granthum said throughout the investigation the multiple K-9 units that have come through have not even picked up a scent of George. He said there are no units searching right now, but they have teams of search and rescue that are on stand-by for any kind of report or tip.

The candlelight vigil for Adline George will be Sept. 8 at 6:30 p.m. at the Beloit Community Center.

“We are asking the community to come and support us and we are letting the community know we are here and still looking,” George said. “We thank everybody. We have been so busy and our minds are constantly racing, worried about her and thinking about her. If we have not thanked anybody its because we are so occupied with finding our mother.”

When receiving calls concerning Medicare, citizens should be aware that such calls could be scams. A concerned citizen reported receiving... read more