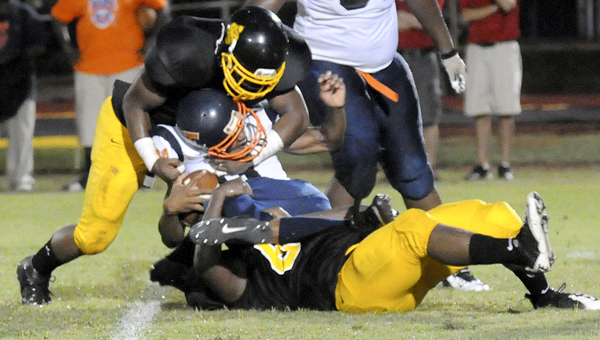 A pair of Ellwood defenders wrap up Francis Marion’s quarterback during a game at Memorial Stadium on Thursday. The win gave Ellwood its first win in an 11-man football game and its first win as a member of the Alabama High School Athletic Association. -- Tim Reeves

Even a little rain from the remnants of Hurricane Isaac couldn’t dampen the enthusiasm shown by the Ellwood Christian Eagles. They had just made history. They had reason to celebrate.

For the first time in the school’s history, the school’s football team had won an 11-man football game, and did so in dominating fashion.

The Eagles knocked off the Francis Marion Rams 38-0, and in doing so, sent a message to the rest of their opponents on the schedule that the Eagles are no longer a pushover.

In the victory, the Eagles held the Rams to just 15 yards of offense, forcing many of the Ram runners into negative totals on the evening. The defense blocked punts, sacked the quarterback and even had a touchdown of their own.

“I knew going into the season that we had a chance to have a strong defense and they showed why tonight,” Ellwood head coach Michael Stokes said. “We still have a lot of work to do, but tonight feels great; the kids did great.”

The game could not have started out any better for the Eagles as they scored the very first time they touched the ball.

With a little more than four minutes gone in the first quarter, on their first offensive play, Eagle quarterback Jalen Furlow handed the ball off to Kerry Ford, who proceeded to break two tackles in the backfield and then raced up the right sideline for 35 yards. It was all the points the Eagles needed, but it wasn’t the final points they’d score.

With 7:30 left in the second quarter Quintravis Johnson picked off a Francis Marion Ram pass in the flat and then returned it 24 yards for a touchdown. After the failed two-point conversion attempt, the Eagles held a 12-0 lead.

On their next possession, Deriaun Glenn capped off a drive with a 3-yard touchdown. Furlow capped off the drive with a two-point conversion, extending the Eagles’ lead to 20-0.

Rayford Mitchell would get a rushing touchdown of his own in the third quarter, running the ball in from 12 yards out with just over eight minutes left in the quarter.

Seven minutes later, Ellwood would take advantage of great field position, and score again. This time, Furlow scored on an 8-yard touchdown run with 26.7 seconds left in the third quarter.

Ellwood’s final score would be set up by a long, 71-yard run by Michael Lewis that set the Eagles up at the 12-yard line. Raheem Velazquez would cap off the drive with a touchdown run with 2:13 remaining in the game.

Overall the Eagles had 199 yards of total offense, all of which came on the ground.

As for the game ball, Stokes knew exactly who the recipient would be.

“I think this is going to go to Rev. Gary Crum,” Stokes said of Ellwood Christian Academy’s founder. “If it weren’t for him, his vision, we wouldn’t be here today and celebrating today. He deserves this.”