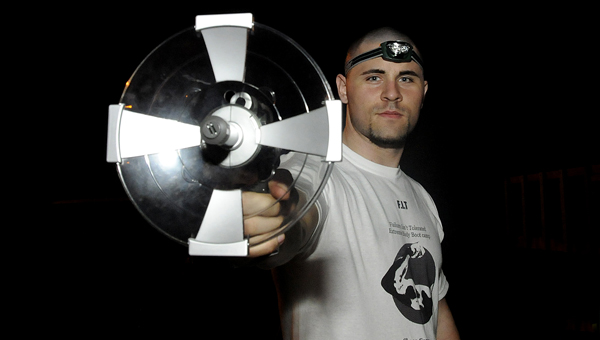 The Alabama Paranormal Association brings thousands of dollars worth of equipment to Selma for their investigation. -- Ashley Johnson

Editor’s note: The Selma Times-Journal sent an embedded reporter to participate in a paranormal ghost hunt at Kenan’s Mill.

Selma is known as a historical city, from the Civil War battles, to the Civil Rights marches — and according to the Alabama Paranormal Association, there are spirits from those historical times still haunting and lurking around the area. On Friday, the association came into town for an investigation, studying Old Cahawba, Kenan’s Mill and the St. James Hotel.

“That never happens to me, I never get so freaked out like that and scream,” Dale L., director of the Alabama Paranormal Association said about being grabbed by a spirit inside the charcoal kiln at Kenan’s Mill. “I’ve been grabbed by spirits before but I guess I just wasn’t expecting that.”

Dale is a medium and does frequent investigations, both with the association and for private clients. The paranormal investigation team uses technology like LD and infrared cameras, as well as recorders to pick up EVPs, or electronic voice phenomenon.

“I think I was just surprised at the level of activity at Kenan’s Mill and I wasn’t expecting it to be that much,” Dale said. “But I would have to say it’s a highly active location and if we would have spent more time there, we would have found even more.”

She said her team usually finds more than one spirit at haunted locations, but the beings at Kenan’s Mill were strong enough to grab and tug at her clothing multiple times throughout the night, something that she said is rare.

“We got an EVP at the St. James Hotel, we were asking lots of questions about Jesse James,” she said. “We asked if we could do something for Jesse James and the Ghost Box gave us an EVP that said, ‘Yes, find my missing gun.’”

Upon researching that phrase that Dale said she heard multiple times, she said it is common knowledge that Jesse James either lost or had a gun stolen from him at the hotel.

The team uses a device called a Ghost Box, which scans radio stations rapidly and in between the frequencies the ghosts can deliver messages. They also used an Ovilus, a device that picks up words from electromagnetic waves, and then it says the words. In the charcoal kiln at Kenan’s Mill, Dale said the Ovilus does not normally say that many words.

“We are normally lucky if we can get [spirits] to just knock on the walls, but this was just a really, really strong spirit or entity,” Dale said. “It doesn’t usually pick up that many and it was kicking out words left and right.”

While in the kiln as Dale asked questions to the spirit, the Ovilus shouted words like, “family,” “doctor,” “cousins” — which Dale attributes to the Kenan family that lived on that site. At one point Dale told the spirit that it was saying too many words.

“Explain…Medium,” the Ovilus read out in response. At that moment Dale let out a shrieking scream and ran out of the kiln.

“It pulled on my shirt and it felt like it touched my skin. It was like a real person that just pushed on me and pulled me backwards,” Dale said.

Dale and the Alabama Paranormal Association travel the state and the country for investigations, but Dale said she hopes they will come back to Selma at some point.

“The history in Selma is just extraordinary,” she said. “There is just so much to investigate.”

Lamont DeWayne Chapman remains in the Dallas County Jail under a bond just over $1 million, while two others sit... read more