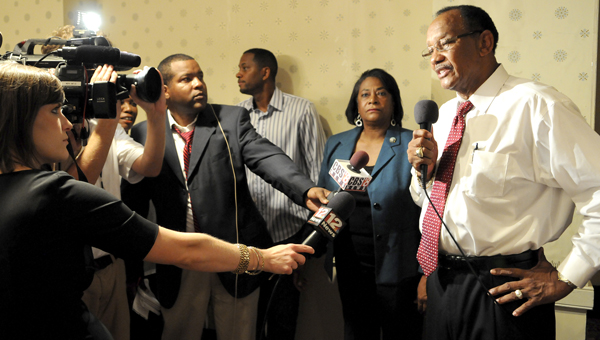 Members of the media get their shot of Selma Mayor George Evans as he thanks his supporters for helping him win re-election Tuesday night. Evans earned another four-year term after defeating former Selma mayor James Perkins Jr. -- Tim Reeves

Selma Mayor George Evans walked down the hall of the Historic St. James Hotel Tuesday evening, just moments after learning he had earned another four-year term. He was without a jacket and looked relieved after a tough re-election campaign against former two-term mayor James Perkins Jr.

It took Evans and his wife Jeannie, five minutes to make their way through the crowd to a microphone, where the announcer introduced him as saying, “the voters of Selma have spoken loud and clear that they wanted four more years of Mayor George Patrick Evans.”

The celebration, which began a little later than those in the Evans’ camp would have liked, was put on hold while absentee ballots were counted at Selma City Hall, a process that lasted until after 8 p.m.

With many knowing the results of the 16 polling locations in Selma, Evans held a 172 vote lead over Perkins, well within the margin of the 1,032 absentee votes cast in that race alone.

But, in that box, Evans ended up earning 719 votes to just 319 for Perkins, giving the incumbent mayor the cushion he needed to finally celebrate.

Overall, Evans earned 54 percent of the vote, winning by a margin of 578.

Of the 17 precincts, which included the absentee box, Evans carried eight of the boxes, while Perkins carried nine. But, in the eight Evans won, he did so by a much larger percentage — and carried the absentee box by a more than 2-to-1 margin — than those boxes Perkins won.

“I, I, well, I want to give all of you the thanks for this. I can’t thank you and the citizens of Selma enough,” Evans told those gathered. “Everybody has worked hard to make this day possible by giving of themselves and their service.”

Even in a moment of celebration, Evans brought the crowd back to the work that remains to be done in Selma, and called on their help.

Evans did admit the re-election bid, against Perkins, had been a tough campaign.

“It’s been a hard battle, it really has. And, I’m glad it’s over,” Evans said. “As for my opponent, Mr. Perkins, my hats off to he and his committee for the work they did, the campaign they ran.”

Attempts to reach Perkins and his campaign were unsuccessful Tuesday.

ORRVILLE — The voters in Orrville felt 2012 was a year for history to be made, electing not only the... read more