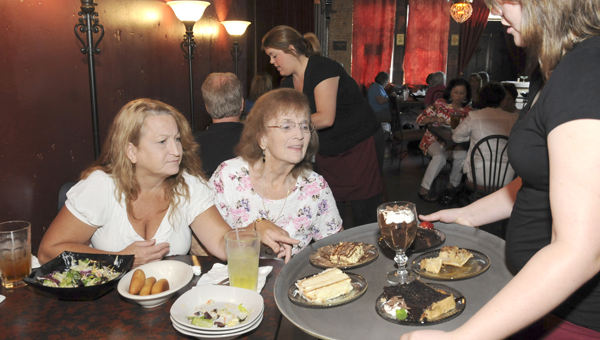 Delicious scents of marinara, alfredo and garlic wafted out of the Harmony Club as a new Italian restaurant, The Vineyard, celebrated its first week in Selma.

Ruth Lee, owner of the Vineyard, which is located at 1005 Water Avenue, said her inspiration for the restaurant began four years ago after spending a year in Italy.

“I lived in Italy for a year and I just loved the food there,” Lee said. “I had been wanting an Italian restaurant in Selma for a long time.”

A lot of prep-work was needed to get the space ready for a restaurant, Lee said—“We pretty much had to build everything.” A kitchen, bar and bathroom all had to be installed as well as new light fixtures, tables and curtains.

The restaurant is on the first floor of The Harmony Club, which was built in 1909 and used to serve as a social club for the Jewish community in Selma. The first floor housed two retail spaces while the second floor used to be a restaurant up front and a men’s lounge in the back.

Several Italian dishes are featured on the menu such as chicken marsala, spaghetti and meatballs, chicken and shrimp alfredo and manicotti.

“We also have a t-bone steak for those who don’t care for Italian with a baked potato and salad,” Lee said, whose favorite dishes are the manicotti and chicken alfredo.

Selma citizens Lewis Brown and Luke Jones were among the many who dined at The Vineyard during its opening week.

“I think it’s exciting,” Jones said. “It’s always good to have a new place to eat.”

Jones ordered the manicotti and Brown ordered the chicken parmesean, and both said they thoroughly enjoyed their meals.

“This is the only Italian restaurant in town, unless you count Pizza Hut,” Brown said. “The atmosphere is really neat too.”

Lee said the restaurant, which is now only open for lunch, will be open for dinner beginning Friday. A Sunday brunch will also be served, which includes eggs Benedict and shrimp and grits along with other menu items.