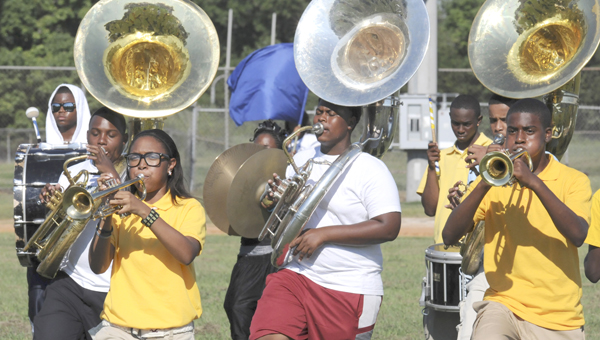 While the Selma High School football team is on the practice field preparing for the start of the season, just a few hundred yards away another group of students is conducting the sounds of Friday night.

The Selma High School marching band has been gearing up for the upcoming football season for weeks before school even started, and band director Brandon Williams said the Marching Saints are ready for their first show of the season.

“It’s been an interesting ride for the students, as well as myself, but everything is slowly falling into place like I knew it would,” Williams said. “The students are grasping the halftime show for the first game, which is next week, and I think it’s going to be a very exciting show for everybody.”

During the early days of band camp before the start of school earlier this week, the Saints would start camp at 5 a.m., with a break at noon, come back at 3 p.m. and finish at 7 p.m.

Practices during school usually run two hours, and Williams said the reason for all the hard work is a high standard of excellence.

“They have learned the music, they’re out here playing the music, which is a very, very good thing because I want us to sound great, not just good,” Williams said. “Anybody can be just good or okay. I don’t want to be that. I want my students to be better than anybody else. Period. For those that wonder why we practice so hard and for so long, this is why. Because if you don’t have pride in what you do, nobody else is going to have pride in it.

“I’m very, very proud of my students and parents who appreciate me unconditionally for how long I have their kids and everything. With school starting, I’m trying to make sure that they’re getting their school work as well.”

While Williams said the Saints will have a few new moves on the field on Friday nights and will play a little bit of old school music, naturally, he’s keeping a few secrets.

“The formations that we’re doing on the field are a little bit different, of course. The drill tune is different this year,” Williams said. “Of course, I’m not going to say how. I want it to be a surprise for everybody when we come out.”

Overall, Williams said the students who have dedicated their time every single day since the start of camp are the ones who’ll help the Saints continue to achieve greatness.

“Without them, my band wouldn’t run. They have been just outstanding in their work ethic and they don’t complain. They’re very healthy and that’s why we work so hard is to keep them healthy because at the halftime show your body is moving for at least eight minutes straight,” Williams said. “For those that have never worked out eight minutes straight with no break at all, that’s not a simple thing.”

Credit cards are notorious for eating up money, high interest rates and a whole long list of things especially in... read more