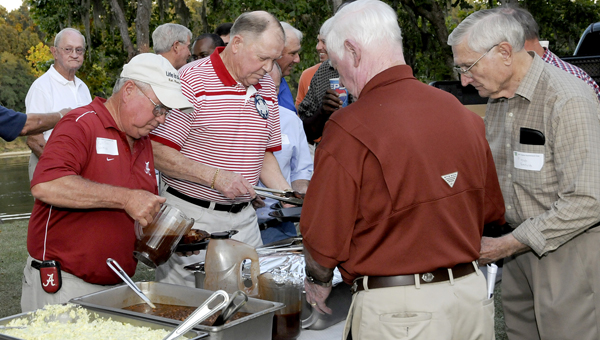 It’s that time of year again where hundreds in Selma will gather for food, fun, fellowship and football.

The Selma Quarterback Club is preparing to kickoff its 2012 season.

Established in 1941, the quarterback club of Selma is a non-profit organization that has provided members with a place to listen to speakers from throughout the South and the nation and to talk football and have a good time.

The overall aim, though, said Leonard Ingram, Captain of the 2012 Selma Quarterback Club and CEO, is providing local students with scholarships.

“The main thrust of it is $16,000 worth of scholarships and the way we give those out is four, $1,000 scholarships. Gus Colvin is the head of that committee and he’s done a wonderful job the last four or five years,” Ingram said. “ We’ll go over all of the people who’ve submitted for the scholarship from the area schools. We had about 15 apply last year and we interviewed them and got it down to four. What that is, as long as they stay in school and make the grades, they get $1,000 from us every year for four years.”

There will be eight meetings, with start times for a free social and barbeque at 5:30 p.m. on Mondays, followed by the meeting at 6 p.m.

The first meeting will be Monday, Aug. 27 at 5:30 p.m. at the Julius Talton river home on the Alabama River.

With past speakers including the likes of Paul Finebaum, this year’s speakers will include W.T. “Bill Hope and Bert Caldwell, who produce The Kickoff newsletter, on Aug. 27 at the club’s kickoff meeting at 5:30 p.m. at the Julius Talton river home on the Alabama River.

“This year, I think our main attraction is probably going to be Mal Moore, the athletic director of the University of Alabama,” Ingram said. “Mr. Moore is the only one who’s been at Alabama through nine national championships. To get him as a guest speaker, we’re very honored.”

Ingram said the club has door-prize drawings each night and will have a $10,000 big ticket drawing on Oct. 29 and the scholarship presentation will be on Nov. 19.

“We also have a drawing for a big-ticket drawing,” Ingram said. “We give away $10,000 and we make about $10,000 off of that. It’s a real good deal for the people purchasing the tickets and it’s a good deal for us to raise money for our scholarships.”

Ingram said the club is also planning to have a dove hunt this year.

There is a $175 registration fee and guest tickets are $35 at meetings.