Fund protects those who protect community 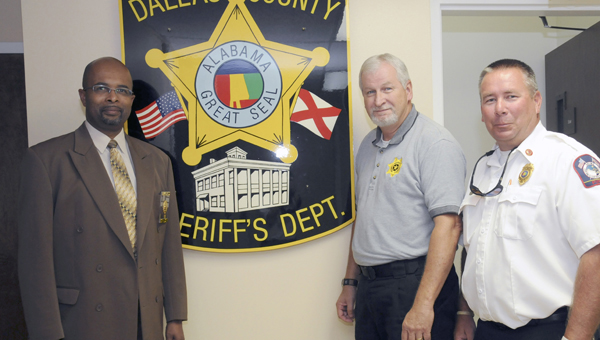 The Public Safety Insurance Fund offers a life insurance policy to safety officials who are killed while in active duty. It also offers an accidental death policy. Dallas County in one of two counties in Alabama that offers this fund to its service men and women. Above (from left) Selma Chief of Police William T. Riley, Dallas County Sherriff Harris Huffman and Selma Fire Department batallion chief Doug Horton all take part in organizing donations. -- Ashley Johnson

It is often questioned why men and women who save children from burning cars and catch thieves who stole property, are paid so much less than professional athletes that make millions. Police officers, firefighters, and sheriff’s deputies in Dallas County are vital to our safety and peace of mind, yet they often work long hours with smaller wages not competitive with surrounding counties.

Fortunately Dallas County is one of two counties in the state that offers those in active duty a life insurance policy that could potentially hand a grieving family member $60,000 if the officer were killed in the line of duty. There is also a smaller policy for accidental death of an active duty officer that was not on the job at the time of death.

Every Selma fire fighter, Selma police officer and Dallas County Sheriff’s deputy is covered under this policy that is fed solely by donations — not tax money, or the safety departments themselves. The Public Safety Insurance Fund does not cost safety officers a penny, yet it could one day offer them much more.

“If someone is killed in the line of duty — that’s tough enough,” Dallas County Sheriff, Harris Huffman, said about the servicemen’s family. “They may have life insurance but it wont be enough. They probably have kids who are trying to go to college and this will just defray the high costs of a funeral, and help someone get back up on their feet after losing a loved one.”

Nancy Travis, executive director for SABRA Sanctuary, plays a role in gathering donations annually for the fund, ever since its creator Billy Atchison passed away.

“Its that time of year again,” Travis said about collecting contributions for the PSIF.

She said the fund collects contributions annually because they have to continue to pay the premium for the policy.

All contributors get a bumper sticker and donations are tax deductible.

“The Public Safety Insurance Fund is a group of Dallas County businesses, organizations and individuals in the community that have joined together to tangibly show their appreciation to the public safety officers of the county,” Travis said. “Members of the PSIF feel this gift is a small way to say thank you to the public safety officers for their sacrifice and commitment they make for the protection of our families and community.”

If a business, family or organization would like to make a tax deductable donation to this fund, they can make a check payable to PSIF and mail to PSIF at P.O. Box 393 Selma, AL 36701.

By Sarah Cook The Selma Times-Journal   Ward 4 was anything but stationary Thursday as it took to the streets... read more