Community celebrates return of the R.B. Hudson name to school 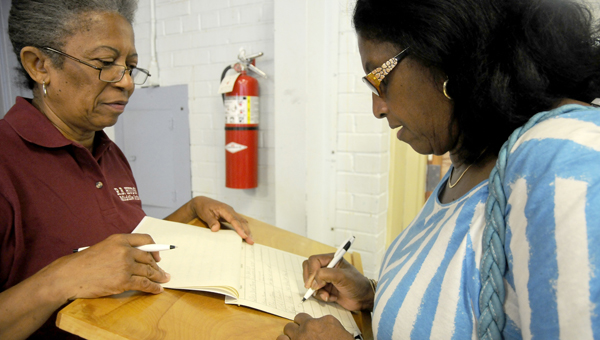 Mary Dover, right, from the R.B. Hudson class of 1966, signs into the renaming and dedication service on Wednesday. Dover was one of almost 100 former students, teachers and others in the community who were involved in the school and attended the service. The ceremony renamed CHAT Academy to R.B. Hudson Middle School. -- Ashley Johnson

A night full of prayer, dedication, recognition and reminiscing was the atmosphere of the dedication service to rename CHAT Academy as R.B. Hudson Middle School.

The name change comes after multiple committee meetings and school board meetings that occurred when former students at R.B. Hudson wanted to restore the feeling of pride and heritage that came with the name R.B. Hudson.

“There was so much pride with the name R.B. Hudson,” former Selma City School superintendent of education Freeman Waller said. “Everyone took pride in the school and this brings back a sense of belonging. My heart is just pricked to restore the name of Richard Byron Hudson.”

Hudson was the principal of Clark Elementary School from 1889 to 1931 in Selma, but to black teachers and the African American community, he was known as the “black superintendent.” Waller said he was a leader and hero in African-American education.

“I am so glad to have the cornerstone of R.B. Hudson back in place,” Waller said.

“As a student here I had no fear as to what I would learn,” Wimberley said about attending the school during the Civil Rights Movement in the 1960s. “We were exposed to every area of academics that you could be exposed to at an all-black school.”

Wimberley said, when she continued on to higher education once she graduated, people always asked her where she was from, because they were impressed with her knowledge.

Former R.B. Hudson teacher Ruth J. Brooks said she taught business skills like typing and shorthand from 1949 to 1969. She reminisced about what it was like to teach during the Civil Rights Movement, with R.B Hudson being the first black high school in Selma.

“Everybody wanted to participate,” Brooks said. “Kids would come to school for roll call in the morning and then meet in the hallways and then go march on our town.”

And it is that sense of pride of togetherness that brought a diverse crowd to celebrate the renaming.

“The spirit of this school has stayed the same, even though it has changed names several times,” Principal of R.B. Hudson Middle School, Logan Searcy, said.

ORRVILLE — Ask any official with the Dallas County Sheriff’s Department for an update on the continuing search for Beloit... read more