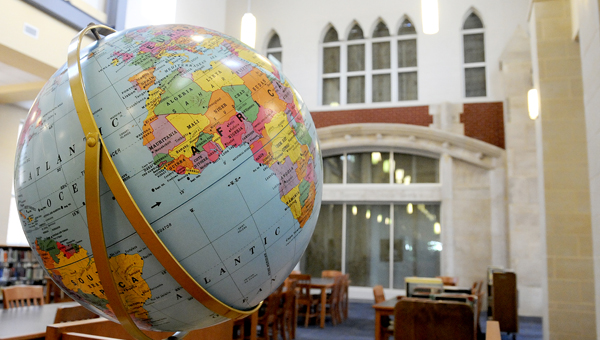 Hundreds of guests and dignitaries came together Wednesday morning to get their first look at the new Selma High School. Administrators and school board leaders cut the ribbon on the new school that cost an estimated $27 million. The centerpiece of the new school is the new media center, which features as one of its walls, the old entrance of the former Albert G. Parrish High School and Selma High School. -- Tim Reeves

Selma High School principal Wanda McCall said Wednesday was better than Christmas morning, as she and other school and system administrators welcomed the public to view the new Selma High School.

“This is just amazing. What an amazing day; an amazing event,” McCall said, as she watched as guests began their tour of the new, massive, $27 million building, set to welcome students on their first day of classes on Aug. 20. “This is better than Christmas morning.”

As she sat back and watched as others got their first look at the building, McCall jokingly thought of a “friend” she may not ever see again in this new school.

Hundreds turned out for the Wednesday morning event that saw members of the Selma City School Board and Selma City School System take official possession of the new high school from contractors, who still have a few things on the construction process.

“This has really been a team effort, from the school board, to the superintendent Gerald Shirley to Mrs. McCall,” construction manager for Volkert & Associates Paul Ensign said. “There’s still some work to do, but it is nice to show this off to the community. We have had little challenges here and there, but the success of this project is really a credit to the team effort put forth by everybody.”

Even though work continues in advance of the first day of school on Aug. 20, the school brought some to tears, including former Selma City Councilwoman Jean T. Martin, who was a 1941 graduate of Albert G. Parrish High School, the name of the high school before being renamed to Selma High School.

Her request was fulfilled — and maybe a dream realized — when she walked into the new school’s media center and saw designers had incorporated the former school’s iconic entrance as one of the center’s main walls and entrance.

“Isn’t that wonderful? That’s fantastic,” Martin said as she walked into the center. “How great is that?”

Gail Ingram, a 1965 graduate of A.G. Parrish High School, said the new school — although completely new, gave her quite a familiar feel.

“This feels just like the old school; the way the library faces, the way the front doors open, the way they used the old entrance in the media center, the way the halls are laid out,” Ingram said as she went on her tour. “It just feels like home.”

While alumni and community leaders celebrated the new facility, Selma City School Board president Henry Hicks Sr. said the school, while gorgeous and technologically advanced, has a more important job.

“This is sending a signal to our students. This is a challenge to them. We are showing them we have stepped up, that we are investing in them and it’s time for them to invest in their education,” Hicks said. “We are really showing industries, we are showing businesses, that ‘yes, you can bring your jobs here,’ because we are putting education at the top of the mountain.”

Rev. F.D. Reese, himself a former educator and principal at Selma High School, stood in the lobby following Wednesday’s ribbon cutting, having already offered a blessing to the event and the school during the ceremonies, and was pleased with what he saw.

“I commend everyone who has had anything to do with this project,” Reese said. “I just pray the students who come through here will take advantage of the opportunities, the great renewal, of the things that have been done here. I just thank God.”

As Reese was preparing to leave, he was asked if the new school gave him thoughts of ever returning to education, being a principal. “I am just happy for everyone,” Reese said. “They have my prayers and my blessings.”

A body was found in the Alabama River Monday, just yards from the Edmund Pettus Bridge. Wednesday, the Selma Police... read more