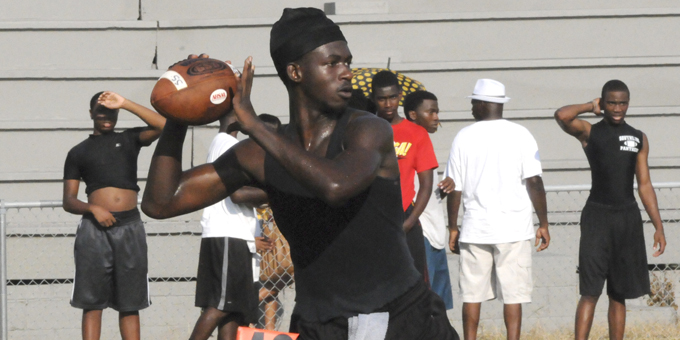 Southside High School quarterback Chris Raymond looks for an open man during the Panthers 7-on-7 camp on Wednesday. The Panthers will enter fall practices on Aug. 6 with a new head football coach in Daniel Flowers. -- File photo

As new Southside High School head football coach Daniel Flowers took control of the program about a week ago, he took stock of the challenges facing him in his efforts to turn around a Panthers program that finished 1-9 last season.

Flowers said one of the first issues he encountered during his first week on the job was one that’s not necessarily a bad problem to have, as it shows players are excited about joining the program.

“One challenge is having enough equipment for everybody,” Flowers said. “First day, we only had 25 to 30 kids, so equipment stuff was looking pretty fine. After this past Thursday, I noticed that we had about 52 kids, but like 45 pairs of shoulder pads. It’s always a good thing when you have more kids, but you have to work on getting equipment.”

Flowers said the numbers increase is due in part to a lot of ninth graders coming in and some players coming back to town from vacation.

Flowers added there are already plans in motion to talk with members of the Dallas County School Board and Southside principal Clarence Jackson about fundraisers that will help the team get more equipment.

Flower said he likes that there is enthusiasm from players about being a part of the program.

“As a coach coming in, it’s exciting,” Flowers said. “I’ve been doing a lot of motivating at practice and the kids like it because I’m making it fun for them, and I guess the word’s getting out and they’re bringing their friends to practice. Mr. Jackson likes it, I like it and now we have to find a way to keep them out there and get some uniforms for them.”

As for hitting the field for the first official practices on Aug. 6, Flowers said he wants to work on teaching the basics and implementing small portions of the offensive and defensive schemes, but wants to make sure every player is present before putting in more advanced plays.

“All said, you want it to be kind of simple and teach little things at a time. You don’t want to go and start your whole playbook in a short period of time,” Flowers said. “You probably want to spend maybe the first two days working on the basic plays, the running formation, the passing formation and stuff like that. Defensive wise, I keep things simple with basic man-to-man coverages — I’ll probably add in one zone coverage. I’m kind of scarce about teaching things to the kids because more keep coming out. I don’t want to have to keep teaching the same thing over and over again. I don’t want to put too much stuff in until I know all of the bodies are there.”

As practices near, local coaches express admiration for football

The Keith High School Bears hold up their helmets at the end of a scrimmage this past spring. Local coaches... read more