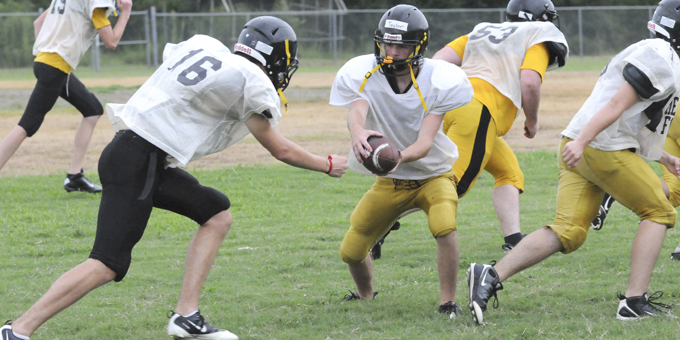 Meadowview Christian School quarterback Seth Taylor, right, hands off to running back Dylan Lawrence during practice on Thursday. The Trojans practiced in full equipment for the first time this season during two-a-days on Thursday. -- Robert Hudson

When the Meadowview Christian School Trojans took the field for football practices Thursday morning and afternoon, they did so in full gear.

The Trojans held their first practices in full equipment this season on Thursday morning and afternoon during two-a-days.

While practices focused on installing more plays on the offensive side of the ball, Trojans head football coach Lebo Jones said they also aimed to get players used to contact again as their scrimmage game on Aug. 17 and first game of the regular season on Aug. 24 get closer and closer.

“At the morning practice, we really got after it. We did a lot of hitting drills, a lot of contact this morning,” Jones said. “In the afternoon, we were fine-tuning our offense.”

Physicality and football go hand in hand, and contact is among the most important parts of the game.

Jones said it’s crucial to get players used to the contact early, not only so they’re prepared for hitting when the season arrives, but also to see who does and doesn’t have the stomach to play the game.

“It’s very important. Football is an aggressive game and if you don’t like contact, you don’t need to play football,” Jones said. “It gives everybody a chance to get back used to hitting again and see who really wants to play.”

Aside from contact, the Trojans continued implementing their base offensive plays during Thursday’s practices.

“We’ll add more and more every day, but right now, we’re just trying to get the basic plays in and do them correctly,” Jones said. “Then we’ll add some more as we go along.”