Southside hosts 7-on-7 passing camp with season on horizon 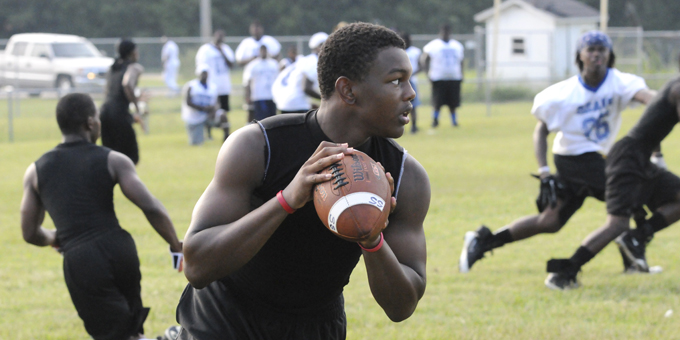 Southside High School quarterback Khamari Gibbs rolls outside of the pocket to look for an open man during a 7-on-7 game against Keith High School on Wednesday. The Panthers hosted a 7-on-7 passing camp on Wednesday as local teams Selma High, Keith and Wilcox Central attended. -- Robert Hudson

With practices set to begin on Aug. 6 for Alabama High School Athletic Association football teams, four schools got together to get a little bit more work in before the official start of the season.

The Southside High School Panthers hosted a 7-on-7 passing camp on Wednesday, as Selma, Keith and Wilcox Central high schools all attended to compete.

The camp gave teams a chance to work on passing plays and defensive coverages against each other.

Daniel Flowers, head football coach of Southside High School, said he liked a lot of what he saw from his team on both sides of the ball during the camp.

“I liked our hustle. The guys got grit and they don’t quit. This is 7-on-7 and, of course, in a real football game you’ve got a line out there, so basically I was looking for conditioning today,” Flowers said. “Who runs quick routes, who knows coverages, who knows plays, and how well they retain information. Defensive wise, they look pretty good. Defense went on key with everything they need to do as far as our man coverages and our zones. They looked good for pretty much the second day we did something together.”

Harry Crum, head football coach of Keith High School, said he’s excited that football season is underway and his players did a good job of competing and following their assignments.

“I think they’re doing alright — I’m probably more animated than the players because I get kind of excited because it’s football season,” Crum said. “We haven’t had a whole lot of drops. Now, we’ve had some blown coverages, which is to be expected when guys are getting together and playing 7-on-7. For the most part, our guys have been running real well, we had a couple of guys that picked some passes off and we had some big pass breakups. And they love the competition playing against Selma High, Wilcox and Southside, so we’ve done okay.”

Selma offensive coordinator Reggie Glover said the 7-on-7 allowed the Saints to get in some repetitions on both sides of the ball, and all teams involved competed hard.

“We definitely need more reps. The more reps we get, the better,” Glover said. “I appreciate Southside and coach Flowers for giving us this opportunity to get these reps. It’s just a little different from being on your own field playing against your own guys to get a chance to compete against some other guys.

“Positive thing, I did see our guys competing. We played hard.”