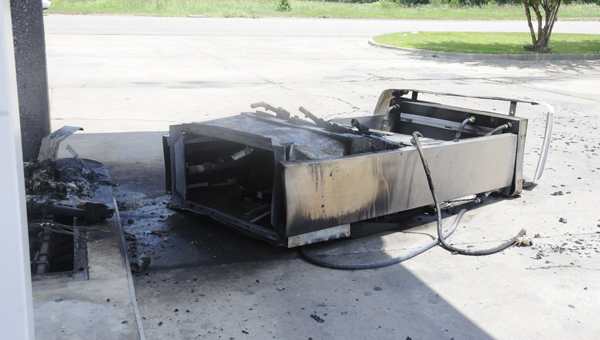 A gas pump at the BP station on Medical Center Parkway exploded at 12:30 p.m. after a driver backed into the pump. -- Ashley Johnson

Those traveling along Selma’s Medical Center Parkway Sunday afternoon had quite a surprise as an accident at a BP gas station caused an explosion that sent a pump flying and igniting a fire.

Sowar Jahmi, manager of the BP station, said he heard an extremely loud boom and then looked outside to see the gas pump explode and shoot straight up into the air and land a couple feet away.

“Somebody backed up and they barely tapped the pump with their car,” Jahmi said. “It was the same impact as if you were to barely just kick a can.”

Jahmi said that even with that little of an impact, the entire pump just exploded. Firefighters with the Selma Fire Department arrived at the scene minutes later and Jahmi said it took them less than ten minutes to put out the blaze.

He also said spectators gathered and watched the pump burn after police blocked off that part of the road on Medical Center Parkway.

“I have seen much worse than this though,” Jahmi said.

He and his family own multiple gas stations and convenience stores and he said that in his experience when someone backs into a pump, the explosion is much bigger.

There were no reported injuries in the explosion.

During a very cordial portion of what proved to be a quite contentious Selma City Council meeting earlier this week,... read more