Alligator hunters get a lesson on the rules of the game 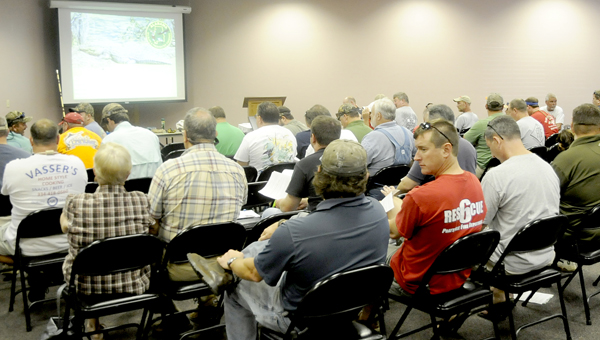 More than 100 attended a mandatory seminar Saturday to learn the rules and regulations of alligator hunting for west central Alabama at the Central Alabama Farmer’s Co-op. -- Ashley Johnson

The wildlife ranger showed the crowd a picture of Richard Simmons sitting atop an alligator holding its jaw closed with his hands.

“If he can do it … so can you,” Ranger Chris Nix said to more than 75 at the Central Alabama Farmer’s Co-op Saturday.

The crowd then learned that in the battle between beast and man on the Alabama River, only man has a set of rules to follow.

Alligator hunters came to accept temporary alligator hunting tags and attend a mandatory seminar on the rules and regulations of the hunt, led by Nix and Joe Johnston, the ranger for the Dallas County area.

The seminar went over a brief history of alligator hunts explaining that they were once an endangered population, but now in 2012 Alabama has given 50 tags to hunters for the Central West Alabama hunt that will last for a total of six non-consecutive days.

The hunt kicks off on Aug. 16 and will continue for two weekends.

“Just use common sense, and pay attention to what you are doing because a 10-foot alligator can hurt you,” Johnston said.

After the presentation Johnston went over some of the more common mistakes he saw hunters make in the area last season.

“One thing I can tell you is that you are going to get checked, there are going to be more game wardens than you have seen in a long time,” Johnston said about people being out on the river, even if they are spectators. “Anybody over 16 and anybody under the age of 65 and they are on that boat you have to have a hunting license.”

He said last year there were many excuses, saying they had their license in their truck back at the dock or at their house, but Johnston said that is unacceptable and if no license is present they will be fined.

“Secondly, no illegal ammunition can be on the boat,” Johnston said. “No pistols, no rifles, no buck shot, no slugs.”

Even if hunters have a pistol permit they will not be tolerated on boats the nights and hours of hunting. Rangers suggest leaving them in cars or at home, because only a simple shotgun is needed to hunt an alligator. In addition guns have to be cased.

“Don’t be a dummy, everybody is out there and there are four or five people in the boat,” Johnston said. “The shotgun will be banging around in the boat and people stepping over it and equipment falling on it — somebody could get killed.”

Participants in the annual Selma Youth Conference work to complete vessels to transport and protect an egg during an egg... read more