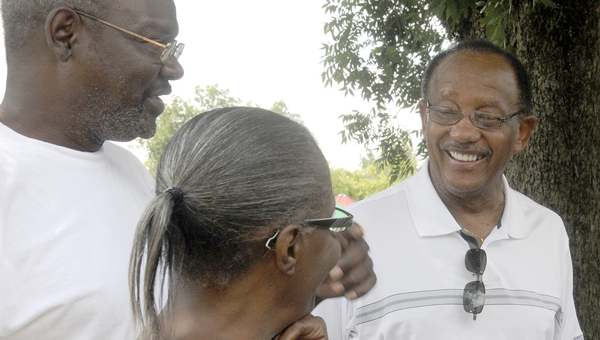 Saturday morning, in his first official event after qualifying, Selma Mayor George Evans hosted a meet and greet, telling those in attendance his plans if he’s re-elected on Aug. 28.

Evans said his main goal, if re-elected, would be to instill a “can-do” attitude in the city and encourage locals to work together toward a brighter future.

Key points Evans brought up in his discussions amongst attendees were combating local crime, reducing litter and revitalizing the downtown area by stimulating business growth.

“We need to get parents and the community involved in combating crime,” Evans said. He suggested every neighborhood create a watch program, saying this in itself could significantly reduce crime.

Evans also spoke about wanting to address trash on the streets.

“It’s a real problem in our city,” Evans said about the litter. “We need to try to get people block by block to clean up the neighborhood.”

The best way to make sure neighborhoods stay clean, Evans said, is making it a priority through teamwork.

He said during his last term as mayor, he encouraged a teamwork mentality in citizens, and he continues to do so if re-elected.

“It’s all about networking and teamwork in the City of Selma,” Evans said. “We’re doing a better job; it’s better than it used to be.”

To stimulate growth, Evans said he would encourage business development on the waterfront, an area he believes could see much business growth.

“We want businesses to locate themselves in Selma because this is the place to have a quality life,” Evans said. “All those (businesses) on the river front and Water Avenue have room to grow.”

Specifically, he plans on developing more programs for city youth and senior citizens, too. Evans said he believes these people are crucial in building the city back.

During the event, children participated in face painting and train rides.

Lastly, Evans encouraged building trust in Selma citizens. Without trust, there is no room to grow and improve, Evans said.

“The key to it all is building trust with each other and learning how to trust one another and work together,” Evans said. “If we get that done, then I think there’s nothing that can stop us.”

Jamarius Simmons shows off his work during the PAL Summer Art Camp Art Show on Friday. The camp, made possible... read more