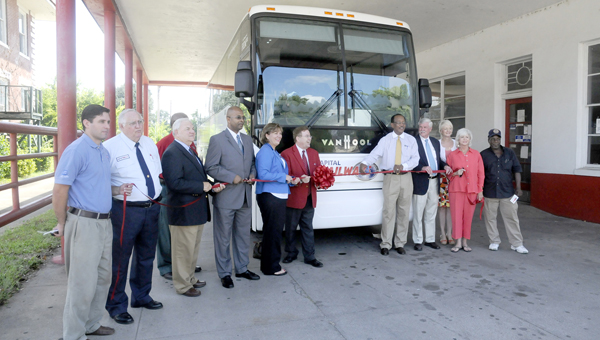 Selma city and business leaders joined officials from Trailways to officially unveil the bus route that makes two stops to Selma each day. The Mobile to Tuscaloosa route has been rolling since late February, but officials also used Tuesday’s announcement to unveil the new $500,000 buses riders will soon enjoy. -- Tim Reeves

True, the route opened in late February, but Szyperski said the early months of operation have given the bus line the chance to iron out the details — and the bugs — of the daily route.

“The spring unveiling was a soft opening of sorts,” Szyperski said. “Ever since then, we have seen an increase in the number of riders and we feel this route is on the way to profitability.”

Tuesday’s announcement also unveiled the type of buses riders who hop on the route in Selma every morning and evening can expect to ride. And, to quote Szyperski, “these are not your daddy’s Trailways buses.”

The new climate-controlled buses, expected to be brought to the route in October, will feature Wi-Fi service, plugs for passengers to charge their electrical devices, and in some cases, satellite television.

Earlier this year, Trailways announced they would reopen a route through Selma thanks to a grant it received from the Federal Transit Administration.

The grant — the value of which was not made available — was provided through the Federal Transit Administration and will be administered by the Alabama Department of Transportation.

According to a company release, the grant is designed to “bring intercity bus service back to the rural areas of the country.”

Capital Trailways applied for and was awarded a portion of the funds to be able to start the western Alabama route, the release said.

The service will not only connect Mobile and Tuscaloosa — with a stop in Selma — but will also connect such towns as Grove Hill, Thomasville, Pine Hill, Camden, Marion, Brent and others.

More information on the service and can be found at www.capitaltrailways.com or by calling (800) 553-9000.

Szyperski said those wanting to purchase tickets can buy the tickets directly from the bus driver at the Selma station on Broad Street, but can do so cheaper online at www.capitaltrailways.com.

The Selma City School Board work session Tuesday had several parents in the crowd in heated discussion between themselves and... read more