Selma’s Art Camp once again a quick hit for children 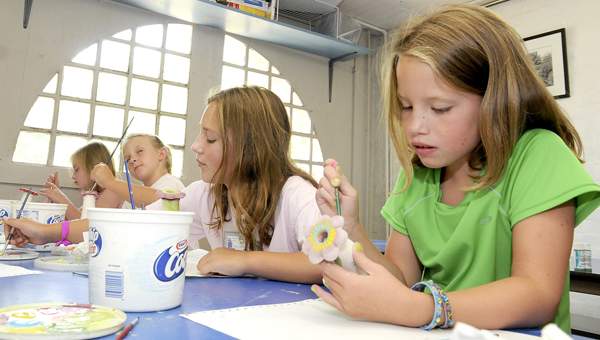 Seats to this summer’s City of Selma Art Camp 2012 program filled up at a record pace, as both sessions reached their capacity in less than 14 days, said Candi Duncan, the city’s art program director.

Now in its second session of the summer, the week-long camp exposes children age 8 and above to various art projects including ceramics, watercolors, sculptures, sketching and more.

“It’s rewarding to see the children have those little light bulbs in their head go off when they learn how to do something new,” Duncan said. “It’s also great because they can’t do anything wrong, especially the children that sometimes have a hard time in school. It looks pretty any way that you do it here. All of the children have a great time.”

Duncan said the fact that camp participants are exposed to many different areas of art during the summer sessions is beneficial to them because they can learn what they like and don’t like to create.

“At most other camps, you have to select one area — drawing, ceramics, watercolors — and you can’t get exposed to all of them,” Duncan said. “But this way, if they like one of them, they know it. Plus, if they don’t like something, they hardly have time to get bored with it and say they don’t want to come anymore. The fact that they get to do a lot of different things here gives them a great opportunity to find out what they like to do.”

Camp participants learned how to spool, painted, made ceramic tiles and jump ropes, sketched and helped make their own lunches on Monday, the first day of camp in the second session, which runs through Friday.

Another camp participant, Anna Claire Keith, 8, said she most enjoyed making her own jump rope, which the children did using pot holder loops.

“I liked making the jump rope because you had to use your hands,” Keith said. “It was a lot of fun.”

Although the summer camp will conclude Friday, Duncan said ceramics classes at the Dallas Academy Building, located on the corner of Selma Avenue and Church Street, would run throughout the year. The classes are open to people of all ages.

Commission gives their thanks to road crews