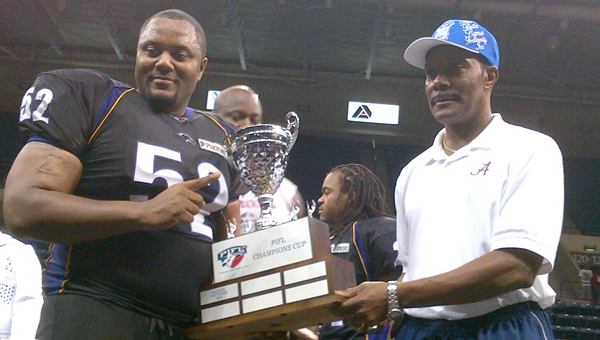 It was another year and another championship for Albany Panthers’ guard Demetrice Jackson.

For Demetrice, a former Francis Marion High School football player and son of Selma High School boys basketball coach Woodie Jackson, it’s an unreal feeling, but something he and his team strived for all season long in a year in which he also made First Team All-PIFL.

“It’s a surreal feeling. It’s just now hitting me that I’m a back-to-back champion in arena football,” Demetrice said. “About midseason, I was telling the players that we wanted to do M.J. [Michael Jordan] numbers. I said, back-to-back championships. That was a very motivational thing for us because we overcame a speed bump or two.”

While Demetrice was playing for Francis Marion from 1998-2002, his father was coaching the Rams on the basketball court during a career that included a record six straight state championships.

Demetrice said his father played a big part in motivating him during high school.

“He played a major role. Once I decided to play football in high school at Francis Marion — we still resided in Selma — during my summer workouts we would go to Bloch Park every morning and work out,” Demetrice said. “I’d do about a mile and a half, probably five 100-yard sprints … and while I’m doing all of that he’ll be jogging around the track. While I’m doing my workout he’d actually jog from our house, which was about six miles, and then he’ll jog another six miles while I’m out there.”

Seeing his father push himself only made Demetrius work harder.

“So, with him doing that, it was like a push for me to continue to dig deeper and work harder than what I’m normally doing because I look at him being my father jogging from the house to Bloch Park then another few miles out there, so I need to push myself as well,” Demetrice said. “With him and his work ethic, that was a motivational tool for me, so I got better as an individual athlete as well.”

Morgan Academy’s Dalton Lee drops back for a pass during spring practices earlier this year. The Senators will host a... read more