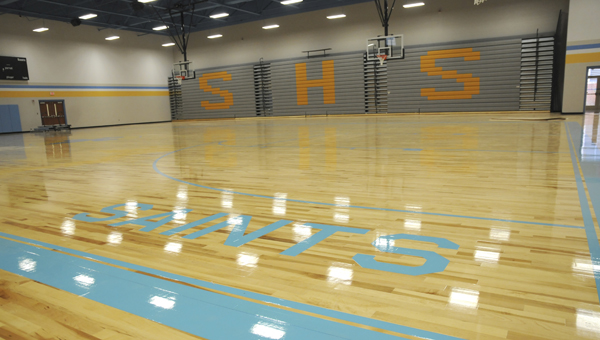 Along with the new Selma High School, the Saints’ new home gym is near completion and will be ready for the start of the season this fall. The new gym will be able to seat 1,400 spectators. -- Ashley Johnson

After spending the past year playing their games at the Wallace Community College-Selma gym, the Selma High School Saints will once again have a floor to call their own when school resumes this fall.

Along with the new high school, the Selma High School Saints basketball teams will have a new gym that will also include a new weight room.

Woodie Jackson, head boys basketball coach of Selma High School, said the new facilities will serve as a benefit for the school’s basketball programs, as in the past they had to share the football fieldhouse across the street.

Jackson added the Saints will benefit from a new gym that will have a larger capacity than the school’s old home floor, but he’s of course still hoping the Saints will continue to attract those standing-room-only crowds that are a common staple of the school’s big games.

“The gym is going to be much larger. We’ll be able to hold a bigger crowd now,” Jackson said. “Hopefully, the crowds are big enough where the people will have to stand around the wall, but the gym seats 1,400, so the capacity will be much greater than what we had.”

Jackson said one of the greatest benefits of the new gym opening up is the Saints won’t have to scramble to find places to practice, as was the case when construction first started on the new school.

“It’s just a blessing. Wallace wasn’t that far, but then with us the last year and a half for two summers, we had to find somewhere to practice at,” Jackson said. “We’d practice over at the middle school [CHAT], Concordia, Wallace, just anywhere we could go. It’s definitely a blessing for playing and practicing purposes.”

The basketball programs, and the student body as a whole, will also reap the rewards of the renovation that the school’s old gym has undergone.

“The one that we played in before — they converted it over — it’s magnificent also,” Jackson said. “That’s going to be what we call the P.E. gym and also one of the practice gyms. The P.E. gym, truly, it looks as good as any gym that we played in within this area, the locker room space included.”